A Strong U.S. Labor Market may be Starting to Lose Some of its Shine

September 25, 2019—Despite nearly a year and a half of simmering (and at times boiling) trade tensions, the U.S. economy has continued to grow, albeit at a slower pace compared to 2018. Much of the economy’s resilience has stemmed from the strength of consumer spending, which accounts for nearly 70% of GDP growth. Though businesses have pared back investment in the face of ongoing uncertainty around trade policy, consumers have so far remained largely unfazed by the trade war. One of the key drivers of the consumer’s undeterred appetite to spend has been the strength of the labor market. The unemployment rate is at multiyear lows, and wages continue to grow at a steady pace, helping to keep consumer wallets open.

However, since the start of 2019, we have started to see signs that some of the bright spots in the labor market are beginning to fade, in part as a natural result of conditions created by a tight labor market late in the economic cycle, but also due to the trade war. Signals from the labor market do not yet point to recession, but they do suggest potential for a deceleration in consumer spending if they deteriorate further, particularly if uncertainty on the trade front begins to weigh more heavily on business employment decisions going forward. We expect GDP growth to decelerate to 1.75%–2.0% in 2019, from 2.9% in 2018, but think the risks for GDP growth remain to the downside if the trade war lingers.

Some reasons for caution

A number of indicators on our watch list have been flagging in recent months relative to strength seen in 2018:

Figure 1: BLS revisions suggest that job growth was lower than originally estimated in late 2018 and early 2019 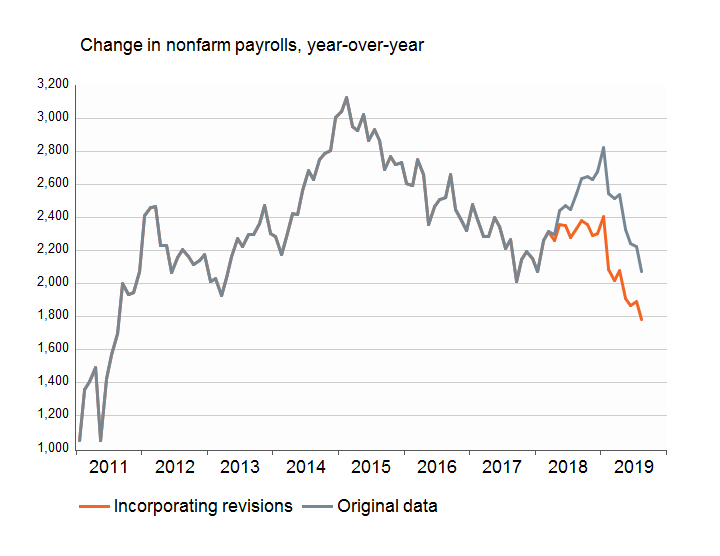 But no alarm bells ringing yet

Though the list of indicators noted above suggest reasons to remain vigilant about the cooling jobs market (and its impact on the consumer), other indicators on our watch list still remain robust. Some of the cooling was to be expected as the result of tight labor market conditions, where demand for workers was outstripping the number of available workers, making it difficult for firms to find qualified workers to hire, and leading to a natural slowdown in the pace of job growth. Average hourly earnings have gradually crept higher as a result, as firms increased wages to attract and retain workers. These higher wages help support consumer spending (but also add to costs for firms).

These higher wages have also helped draw more workers into the labor force, with the labor force participation rate for prime-age workers (25-54 years old) continuing to recover from post-recession lows. The underemployment rate, which includes discouraged workers who have stopped looking for work, and those who are seeking full-time work but can only find part-time work, is sitting near cycle lows.

The pace of average monthly job growth for the past 12 months sits at 148,479,[iv] still above estimates of the breakeven monthly rate of job growth (100,000 jobs) needed to keep the unemployment rate stable. Initial jobless claims for unemployment insurance also remain at multi-decade lows, suggesting the pace of layoffs remains low. The JOLTS survey points to a high quits rate, indicating that workers are confident enough in their ability to find new jobs that they are willing to quit existing jobs, and the hiring rate remains elevated as well. Consumer perceptions of job availability remain strong, with the labor differential (perceptions of whether “jobs are plentiful” vs. “jobs are hard to get”) now at a cycle high.

While the labor market still remains healthy, a number of signals suggest it is starting to cool, due in part to the expected effects of being in the late stages of the economic cycle, in addition to impacts from the trade war. Recent data revisions reveal that the job growth was not as robust as originally estimated for much of 2018. We are mindful of downside risks to consumer spending, and in turn GDP growth, in the event of a deeper labor market softening, which could occur if the impact of a prolonged or escalated trade war begins to spill over from business investment decisions to business hiring decisions, as firms contend with higher costs due to tariffs along with rising wages. But we also recognize that any alleviation of uncertainty on the trade front could remove some of the current drags on the labor market, particularly in the manufacturing sector. We currently maintain a neutral position to equities as we wait for further clarity on trade negotiations.

[i] The Bureau of Labor Statistics undertakes an annual benchmark revision to update its estimates of the number of jobs in the economy with the most complete data available. The annual benchmark revision uses data from the Unemployment Insurance program which covers nearly 97% of all employment across the nation. This is compared to the monthly employment situation report, which is more timely, but where the sample used to estimate the data covers about 30% of all employees on payrolls in the nonfarm sector across the nation.

[iv] This estimate includes the BLS benchmark revision to nonfarm payrolls, assuming that the downward revision to payrolls was distributed evenly to the months affected by the revision (monthly payroll growth is estimated to be 41,750 lower than published in each of the months from September 2019 to March 2019). The 12-month average of nonfarm payrolls unadjusted for the revision was 172,833 jobs per month).