All Eyes Are on China, but Canada Is the One to Watch

September 19, 2018— The past few months have been dominated by news flow on trade, but the U.S./China trade spat has stolen the most headlines and dominated market sentiment. Emerging market equities and the U.S. dollar have fluctuated in concert with U.S./China trade developments. (Harsher headlines have been accompanied by safe-haven flows to the U.S. dollar, which have put extra downward pressure on EM equities and currencies.) In our view, while the world is focused on China, we believe at this juncture Canada is actually more pivotal to the next step for U.S. trade relations.

Despite fits and starts for about a year and still no formal deal yet to speak of, NAFTA negotiations have flown a bit more under the market’s radar of late. We attribute this to the de-escalation of tensions amongst North American trade partners and progress toward a U.S. deal with Mexico at the exact same time that the U.S. ramped up pressure on China. This is no coincidence. The U.S. refined its trade strategy over the summer with the goal of making headway on trade negotiations with Canada, Mexico, and the EU (Figure 1). We believe this was done with the intention of garnering support on the side of the U.S. to apply broader pressure to China from a more unified Western front. While there is some disagreement on the gravity of trade-related discretions by Canada, Mexico, and the EU, there is far more consensus on China’s unfair trade practices. In Congress, complaints about Chinese intellectual property theft, oversupply of certain commodity markets, and government support for China’s state-owned enterprises have become bipartisan issues (which says a lot, given the polarity in Washington today). On Tuesday, the EU Chamber of Commerce presented a 394-page position paper in Beijing detailing the “reform deficit” of China’s marketplace. Representatives from Canada and the EU have also been working to garner support for a working group to reform the World Trade Organization, an effort that will almost certainly involve taking aim at some of China’s unfair trade practices.

Figure 1: Canadian and Mexican currencies have strengthened with improved prospects for a NAFTA deal 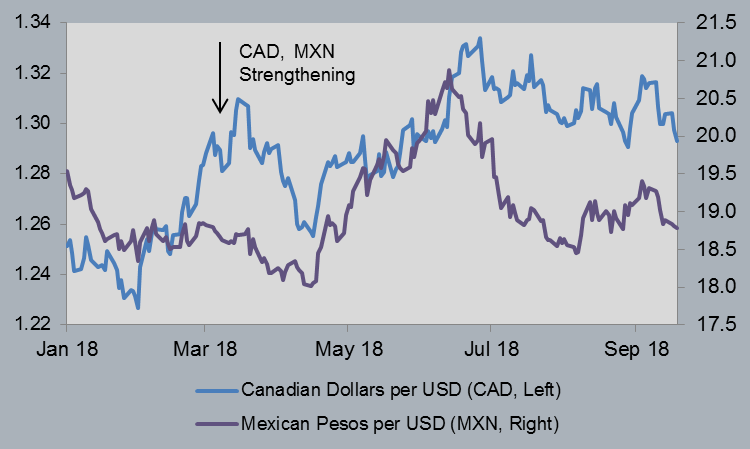 Completing a NAFTA deal and making progress on EU trade negotiations helps the U.S.’s image as a more reasonable negotiator than China, despite the U.S. always taking the first tariff shot. We would go as far as to say that a deal on NAFTA is a necessary first step before material progress can be made with China. And since the U.S. has already come to terms with Mexico, the focus is on Canada.

We believe a trilateral NAFTA deal will get done, but it is not a foregone conclusion, and there are reasons to be cautious. For one, the dairy industry has been a sticking point for Canada. In the current NAFTA deal, access to Canada’s dairy market was excluded. As a result, tariffs on Canadian dairy product imports in excess of strict quotas receive tariffs ranging from 200%-300%. Canada has been unwilling to budge on this issue so far, and Canadian politicians are digging in their heels ahead of municipal elections next month, but some are speculating that Canadian Prime Minister Trudeau may be signaling a willingness to negotiate.

There is also the timeline to consider. After blowing through a series of soft deadlines, the end of September has been targeted for a final agreement between all parties, giving enough time for Mexico’s Congress to ratify the deal before President-elect Andrés Manuel López Obrador takes office on December 1, replacing current President Peña Nieto. The agreement also needs to be passed through U.S. Congress. If this cannot be done before the new congress is sworn in, it risks being stalled, should control of one or both chambers of Congress flip to the Democrats, which is looking likely. Garnering Democratic support for a key Trump administration goal becomes more of a risk should partisan tensions heighten around the midterm elections or Supreme Court nomination process. While this timeline is a bit ambiguous given legal uncertainties (particularly whether the U.S. is actually legally permitted to move forward without Canada), there is significant pressure for Canada to join the deal in coming weeks. If this does not occur, it will not bode well for Chinese trade talks and the broader trade dynamic.

Despite all of the focus on China, we believe the more important catalyst to monitor is the progression of NAFTA trade talks, particularly as it relates to Canada. A NAFTA deal is increasingly looking like a necessary first step, along with progression of US/EU discussions still in their infancy, in order for any resolution between the U.S. and China. Unfortunately, this means that a trade resolution with China could be prolonged, and EM equities could be stalled in the meantime. While there is a possibility that a timeline on China negotiations may be pushed out until after the midterm elections or even 2019, President Trump has taught us that policy direction can change abruptly, and we would expect markets to react sharply if there are signs of a more immediate resolution. It remains our base case that a deal with China will be reached and tariffs will not be a permanent fixture. Emerging economies are certainly facing some country-specific troubles, but we expect growth to improve from solid levels over the next 6-9 months and EM equities to recover from recent lows.