January 26, 2021—We’re not even a month into the new year and it feels like we’ve packed in six months’ worth of news and developments. The nail-biter Senate runoff elections in Georgia were followed by horrific events at the U.S. Capitol, a second impeachment of the sitting President, the inauguration of a new president, and the inauguration of an historic vice president. The inaugurations coincided with the one-year anniversary of the first U.S. COVID-19 diagnosis, a disappointing vaccine rollout, and the 400,000th death from the disease. All the while financial markets have marched upward. The S&P 500 is up 2.5% since the start of the year while our favored equities where we’ve placed overweights, U.S. small cap and emerging markets, are up nearly 9% each.

A key driver behind the optimism is the expectation for more fiscal stimulus for the U.S. economy. President Biden’s proposed $1.9 trillion American Rescue Plan (ARP) comes on the heels of a $900 billion package that was signed into law on December 21, 2020 and has yet to be fully disbursed. Democrat control of the Senate has led some analysts to conclude President Biden will be able to achieve most, if not all, of his stimulus.

While we do expect more stimulus to be implemented, predicting legislators’ actions is perilous and there are guardrails, both political and procedural, that could hamper the effort. To complicate matters more, the Senate is looking to take up former President Trump’s second impeachment trial in two weeks, putting a bit more urgency behind the stimulus effort as bi-partisan agreement may be even more challenging after the impeachment battle. If President Biden and Democrats are forced to go the convoluted route of “budget reconciliation,” then tax hikes will come into the conversation much earlier than they would otherwise. We currently do not expect tax hikes this year.

At a high level, the next stages of stimulus are likely to be smaller than proposed, more targeted, and take longer than some expect. Given broad public and political support for funds to combat the virus and targeted efforts for specific industries, small business, and the unemployed, it’s reasonable to expect another bill worth $500 billion sometime in 1Q 2021. Every dollar above that gets more challenging, though not impossible. A bill that includes more of President Biden’s proposals and tops out at $1 trillion is less likely but still possible. We prefer to carry out scenario analysis on these various possibilities instead of predicting how Congress will act.

President Biden’s proposed $1.9 trillion ARP is clearly massive. The table below is not exhaustive but shows the bulk of the proposal in dollar terms. The overall proposal can roughly be broken into three categories: 1) $400 billion to combat COVID-19, 2) $1 trillion in aid to households, and 3) $500 billion to communities and businesses. 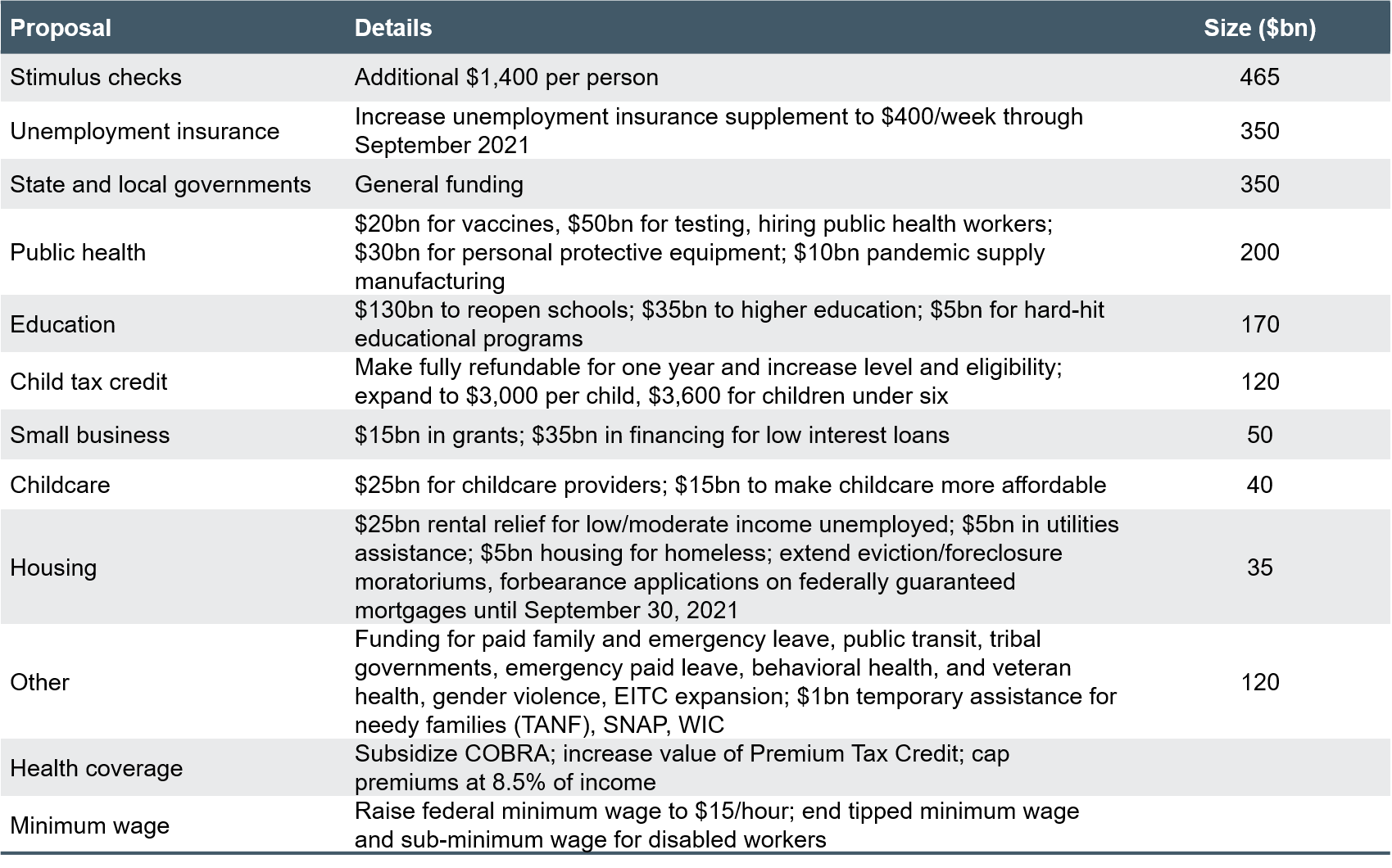 President Biden’s first effort is to pass the stimulus package quickly on a bipartisan basis. That of course means getting the support of 10 Republicans in the Senate and keeping all 50 Democrats on board to overcome a filibuster. There are challenges on both sides. For Republicans, one natural litmus test is the last-minute, unsuccessful push by former President Trump to boost the December stimulus payments to households from $600 per person to $2,000. That happens to be the largest item in Biden’s proposal. By our count only four Republican Senators (Rubio (FL), Hawley (MO), Graham (SC), and Collins (ME)) publicly supported that effort. Perhaps three or four other “usual suspects” thought to be moderates may have been supportive but were either circumspect or non-vocal. Collins, along with Romney (UT), has more recently voiced concern about the overall cost of Biden’s full proposal.

To make the math even more challenging, Democrat Senator Joe Machin (WV) was explicitly dubious of the proposed boost to checks in December, citing the cost, and there are several other Democrats who may be wary. In our view, losing one Democrat is more than just losing one vote, as it will be much more challenging to gain any Republican votes if the party in power is not united. Brian Deese, director of Biden’s National Economic Council, met with a group of moderate Senators this weekend to argue the case for stimulus and reportedly received significant pushback on the total cost of the package and arguments for a smaller, more targeted effort.

The other route: budget reconciliation

A failure to get enough bipartisan support would immediately lead the Democrats to pursue their policy through the arcane budget reconciliation process, which requires only 51 votes in the Senate (50 Democrat senators plus Vice President Harris as the tie-breaker). This is already on the table, with House Speaker Pelosi reportedly telling donors last week she’d like to have the stimulus passed “in two weeks” using this method. Majority Leader Schumer alluded to it this past weekend.

We hesitate to delve into too much detail on the process and instead focus on the takeaways. Budget reconciliation was created in 1974 as a way for Congress to take some budgetary power back from the President. Accordingly, the process is designed to be solely budgetary in nature and intended as a tool for Congress to get the nation’s finances back on track in case they had drifted off course.

Legislators are restricted to items that affect revenue, “mandatory” spending, and the debt ceiling and can only use the process one time per fiscal year. Critically, the budget reconciliation process cannot worsen the budget deficit after the 10-year budget window, so eleven years after passage. Any permanent increased spending, or higher debt that adds to interest payments, then, must be made up for with increased revenue.

Over the past three decades this process has increasingly been used to implement active policy. Republicans used budget reconciliation to pass tax cut legislation in 2017 and also “removed the individual mandate” from Obamacare to buy health insurance. That may not sound like it fits the rules stated above, but it technically does. The 2017 legislation did not actually remove the mandate from the law, but simply changed the penalty from $695 to $0 (see screenshot below). This passed muster with the rules because the mandate was deemed by the Supreme Court to be a tax in 2012, so it falls in the “revenue” category for budget reconciliation.

This may seem like minutiae, but it goes to the heart of whether President Biden and the Democrats will be able to implement the proposed stimulus (as well as Biden’s broader agenda) via the budget reconciliation process. The “direct checks” of $1,400 in the proposal can be implemented as one-time tax credits (also falling into the revenue category) and sent to individuals ahead of tax filing season.

Source: “An Act to provide for reconciliation pursuant to titles II and V of the concurrent resolution on the budget for fiscal year 2018.” More commonly known as the “2017 Tax Cuts and Jobs Act.” Public Law 115-97, 115th Congress.

Much of President Biden’s stimulus plan can be implemented similarly. Plenty of items such as money for schools to reopen, childcare, or state and local governments are not as clear cut, but still possible. A budget expert from the nonpartisan Committee for a Responsible Budget went as far as to say “almost anything [in the Biden stimulus plan] besides the minimum wage tax increase” can be done through this process if they get “creative.”

The critical point is getting such creative solutions passed the Senate Parliamentarian, an appointed position that “serves at the pleasure” of the Majority Leader, which is D.C. jargon for political appointees who can be fired without cause or reason, in contrast with civil service employees. The Parliamentarian makes rulings on these items as they are challenged on the Senate floor. Current Senate Parliamentarian Elizabeth MacDonough, has served in the role since 2012. Schumer can dismiss and replace her if he likes. Oddly, in a fairly open and well-documented democracy, the Parliamentarian’s rulings on budget reconciliation have not been made public since 1992.

As if the process were not already murky enough, some have argued the Senate does not need to abide by the Parliamentarian’s rulings at all, as it is not required by the Constitution or any law. That may be technically true, but some moderate Democrats may cringe at the idea of disrupting precedent.

There are three main takeaways should Democrats go the way of budget reconciliation. The first is they’ll need to get creative to pass many parts of the legislation. Second, because budget reconciliation cannot worsen the long-term budget deficit, Democrats would need to make up for any permanent increased spending with higher taxes somewhere down the line, possibly disrupting the economic recovery and financial markets. They can post-date those tax increases for later in the 10-year budget window period, but for every year they are pushed out, less revenue is realized. (Another option is to cross their fingers and hope the official estimates of economic impacts will produce enough revenue growth over the long term so the spending would pay for itself, which is not likely.) Third, they might be able to ignore those requirements altogether, but it’s not entirely clear that they can, and even less clear that all 50 Democrat senators would take that step.

The strong start in 2021 for markets, and equities in particular, has been driven in large part by expectations of more stimulus now that Democrats have control of the Senate along with President Biden’s proposal for $1.9 trillion. There is strong and widespread public support for more stimulus, but the size and type of such future packages varies by party. We hesitate to make bold predictions regarding the actions of legislators, but we do expect more stimulus to be enacted in future months. Given the challenges in getting 60 votes in the Senate and the limitations of the budget reconciliation process, we expect future stimulus to be smaller and more targeted than President Biden’s proposal.

An eventual stimulus package of $500 billion of targeted efforts to fight the pandemic, help specific industries, and cushion the blow for the unemployed is sufficient to support our current portfolio positioning of an overweight to equities. Packages above that size and going up to $1 trillion would only strengthen the case. We still expect the vaccine rollout to improve and translate to stronger spending on services and a more normal economic environment later in 2021, but with short-term challenges and volatility along the way. We continue to recommend an overweight to equities in client portfolios based on that outlook and recommend those overweight be placed in U.S. small-cap and emerging markets equities. Read our December post for more detail on the other factors playing into our assessment.