Deal or No-Deal: The UK and EU Approach Crunch Time on Brexit

October 5, 2018— On March 29, 2019, the UK officially leaves the EU, 33 months after the June 23, 2016 referendum. Fortunately, the referendum triggered a depreciation of pound sterling that has boosted the international competitiveness of UK goods exporters (Figure 1).  Moreover, since the referendum, UK firms have been assiduously preparing for post-Brexit challenges, even while lobbying the government of Prime Minister Theresa May for a new UK-EU “withdrawal agreement” that would preserve many of the EU Single Market’s benefits. If a withdrawal agreement is reached, it would unlock a transition period lasting through December 31, 2020, allowing UK firms even more time to prepare for EU departure.

Conclusion of a withdrawal agreement remains our base-case scenario—because we expect that German Chancellor Angela Merkel and French President Emmanuel Macron will ultimately avoid risking the consequences of a disorderly UK exit. Nevertheless, as March 29, 2019 looms, a “no deal” Brexit cannot be discounted. If a disorderly UK exit occurs, this could have significant negative impacts on UK and European equities. Likewise, a mutually satisfactory withdrawal agreement could have significant positive impacts. In this Wilmington Wire, we evaluate the political obstacles the PM must overcome to achieve such a deal. We also explore industry preparations for a “no-deal” Brexit, which could help soften the impact on equity returns of such an outcome. 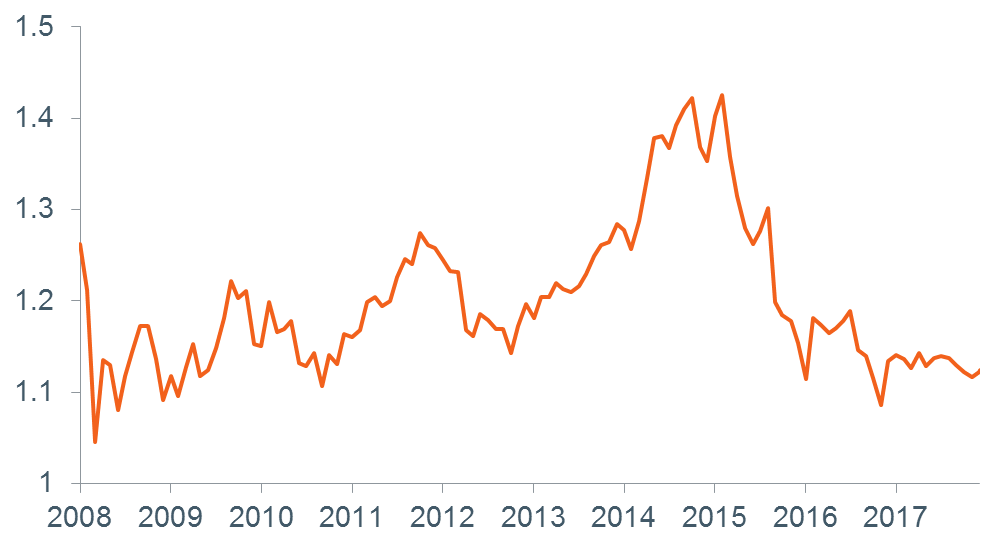 The withdrawal agreement negotiations have centered on the idea of a UK-EU customs union:  whether to have a customs union, and if so, what kind? Under a full customs union, the UK and EU would continue to maintain completely free trade in merchandise goods, including between Northern Ireland and the Republic of Ireland. In return, the UK would be required to retain EU common external tariffs and EU quality and safety regulations. A customs union would not cover trade in services, so UK banks and insurers would lose their automatic “passporting” rights to do business in the EU, and vice-versa. Likewise, it would not automatically enable EU citizens to work in the UK, and vice-versa, which could negatively affect some industries reliant on foreign labor.

… however, a large minority of Conservative MPs, led by Boris Johnson, oppose any customs union

Boris Johnson’s faction wants the UK to be able to set its own tariffs, negotiate its own free trade agreements (including with the EU), and establish its own quality and safety regulation. Johnson believes there are technical solutions that could facilitate customs checks along the intra-Irish border. While he has long been a committed “Leave” advocate, he also views himself as a potential challenger to Theresa May for party leadership. However, he does not have sufficient support within the party to do so. Notably, at this week’s Conservative Party Conference, he refrained from calling for May to resign.

Theresa May is acting as an “honest broker” between those who favor and oppose a customs union. She proposed her partial customs union concepts in her “Chequers plan,” named after the PM’s country estate, where she held a cabinet retreat to discuss her proposals. She wants the UK to retain completely free trade in goods with the EU. In particular, she wants to avoid establishing customs posts along the intra-Irish border. To appease those opposed to a customs union, she is proposing a creative compromise. The UK would continue to charge EU tariffs only for those goods whose onward destination is the EU, but would have the freedom to set tariffs on goods whose final destination is the UK. That would allow the UK to negotiate free trade agreements with third countries. Further, while she wants the UK to have the right to establish its own regulatory standards, she is willing to coordinate regulation on a bilateral basis with the EU. The prime minister has promised that any final deal would be submitted to parliament for approval. Boris Johnson has already indicated his opposition to the PM’s plan, with the rallying cry “Chuck Chequers,” but he does not have enough support from among his fellow Conservatives to stop the PM.

So far, the EU has rejected the prime minister’s approach as unworkable

The EU not yet offered a truly feasible alternative to the Chequers plan. Instead, it has floated a fallback it calls the “Irish backstop.” Northern Ireland would remain in the EU customs/regulatory area. Customs/regulatory checks would take place, instead on seaborne trade between Northern Ireland and the rest of the UK, creating an economic border within the UK itself. However, Northern Ireland unionists, whose support is necessary for May to remain PM, vigorously oppose this idea.

Labor lags the Conservatives by only a few percentage points in opinion polling. Labor Leader Jeremy Corbyn has already indicated that his party would vote against any deal submitted by the PM. He is calling instead for a “People’s Vote” on any deal. Some in his party want the “People’s Vote” to include the option of retaining EU membership, which aims to attract the support of those who feel that the pro-Leave campaign had misled them in 2016 about the benefits of Brexit. The next-scheduled UK general election is in 2022. However, Labor is keenly aware that an early election is possible if Northern Ireland’s unionists withdraw their support from the PM over the terms of UK-EU deal.

In aggregate, UK-listed stocks appear generally prepared for the disruptions of “no-deal Brexit”

UK-listed companies (Figure 2) have had 33 months to prepare for Brexit contingencies, including a “no-deal Brexit.” While hoping for the best, they have been preparing for the worst.    Further, some UK-listed stocks, by virtue of their global operations or their non-UK ownership, are unlikely to experience any significant negative impacts. 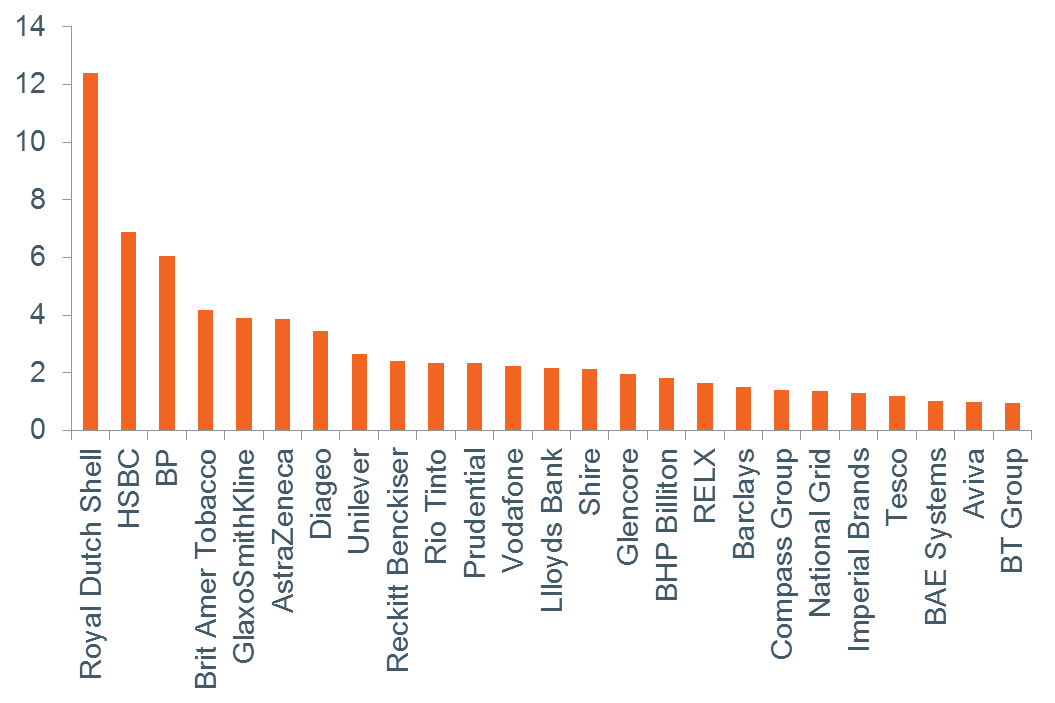 UK stocks comprise 23% of the European equity index and 14% of the EAFE (international developed country) index. Therefore, whether a withdrawal agreement is reached, or the UK leaves the EU without a deal, is critical to our expectations regarding developed country equity markets. Our view is that there is a high probability that a UK-EU deal on a partial customs union will be reached prior to March 29. Given that political rhetoric on all sides is depressing UK equity valuations, the result of such a deal would be to boost the UK stock market and pound sterling, supporting UK equity returns in dollar terms, especially in the days/weeks after the deal is executed. Further, even in the unlikely event of a “no deal” scenario, we believe 33 months of preparations means the adverse impacts on UK-listed firms will generally be less than the market may expect. Therefore, we do not view likely Brexit developments as running contrary to our modest overweight to international developed equities.

Any investment products discussed in this commentary are not insured by the FDIC or any other governmental agency, are not deposits of or other obligations of or guaranteed by M&T Bank, Wilmington Trust, or any other bank or entity, and are subject to risks, including a possible loss of the principal amount invested. Some investment products may be available only to certain “qualified investors”—that is, investors who meet certain income and/or investable assets thresholds. Past performance cannot guarantee a profit or ensure against a loss. Investing involves risk and you may incur a profit or a loss.