Does Quantitative Tightening Pose a Risk to Markets?

July 1, 2022 — As the Federal Reserve (Fed) has turned ever more hawkish with each meeting there has been, appropriately, sharp focus on the accelerated pace of rate hikes. The policy-making Federal Open Market Committee (FOMC) of the Fed raised its short-term interest rate by 0.75% at the June 15, 2022 meeting and raised expectations for future hikes, further driving the debate over whether the U.S. economy will tip into recession as a result. We still expect the economy to grow, but recognize the risks, and made small adjustments to portfolios recently.

Flying a bit under radar are the FOMC’s actions to reduce the Fed’s bloated balance sheet, referred to as “Quantitative Tightening” (QT), that started in June. As previously communicated in May, the FOMC has embarked on its plan to reduce its holdings of U.S. Treasuries and mortgage-backed securities (MBS) and plans to accelerate the pace of reduction in September. There are concerns these action could adversely impact financial markets, drive interest rates higher (after an already nerve-wracking first half of 2022) and worsen the poor performance of equities.

We do not think the current path for balance sheet reduction poses a risk to markets. It has been well-communicated and is likely reflected in current market prices. However, if the FOMC were to alter the trajectory it would have an impact and the direction would depend on whether they’re accelerating or decelerating QT. Additionally, if the economy slowed more than expected and merited a slower pace by the Fed but they stuck to the current plan, markets could get roiled. At a higher level there could in principle be longer term impacts if QT slows the growth of overall money supply, which could, in turn, affect equity returns. Last, it’s worth noting while the Fed has engineered QT once before, for nearly two years from October 2017 to September 2019, the pace this projected to be 2.5-3 times as fast, with a maximum of $95 billion monthly decreases later this year compared to roughly $35 per month last time. In unchartered waters there is always a chance for a surprise.

So called “Quantitative Tightening” is the reverse of “Quantitative Easing” (QE). It is the unwinding of crisis-era efforts that were made to stave off financial crises and deep economic recession. The FOMC purchased $2.8 trillion of U.S. Treasuries and $1.3 trillion of MBS and agency debt during the pandemic (Figure 1) to provide liquidity to markets and to push down on longer-term interest rates. An undesirable side effect of QE, much like a decade ago, is the buildup of “excess” bank reserves shown in Figure 2 on the liabilities side of the Fed’s balance sheet. These are funds that commercial banks have in their accounts at the Fed and are the simple byproduct of the Fed’s asset purchases.

The Fed’s goal in QT is to reduce those excess reserves because they could generate future inflation. They are “excess” in the sense that commercial banks are not required to park them at the Fed. As the economy strengthens banks are more likely to loan those funds into the economy, contributing to money growth, stronger economic demand, and higher prices. As one former FOMC official put it, bank reserves are not inflationary, but are rather “kindling for inflation” at risk of being lit. While such cautionary statements never proved true in the previous cycle, there is greater risk now, with inflation already high and unemployment near record lows. 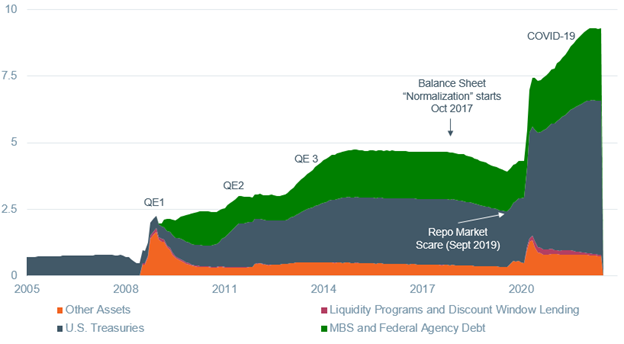 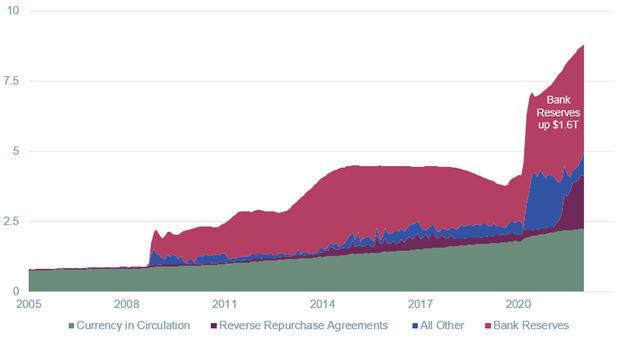 What is the impact?

Concerns about QT hitting markets generally focus on two channels: directly on the securities at hand, or at a very high level through the impacts on broad money supply growth in the economy. We are not concerned about the former but recognize the money growth channel could be a drag on financial markets over the next year.

The direct impacts would come through the markets for U.S. Treasuries and MBS. Some are concerned as the Fed steps away, becoming less of a buyer of those types of securities, the decline in demand could pull down on prices and therefore push longer term interest rates higher. But the FOMC communicated their plans well ahead of time, laying out specifics at the May 4, 2022 meeting so market traders could incorporate the impacts. We believe the path as laid out has been incorporated in market pricing. Should the FOMC accelerate or decelerate the balance sheet action we believe it would affect market pricing. We do not expect an adjustment but if there was one, the most likely would be to slow the unloading of MBS as the housing market has been hit hard by the increase thus far in interest rates.

Figure 3 shows money supply (as measured by M2) and the price return for the Russell 3000, with the former shifted by 12 months to reflect a long lead time for money growth to affect equities. Regression analysis actually shows strong explanatory power that growth in the money supply can explain a great deal of equity market performance 12 months later. However, statistical tests for causality suggest the relationship is actually more likely to run the other direction, that strong equity market performance leads to money growth. And therein lies the rub.

As stated before, the Fed’s balance sheet provides a base for growth of the money supply, but there are myriad other factors at play including interest rates, economic growth, bank lending, to name a few. Note that those factors are inherently cyclical, just like the equity market performance we’re trying to predict. In the end there are so many other impacts on money supply and equity performance that it is too simplistic to reply on the direction of the Fed’s balance sheet as a primary driver of market performance. 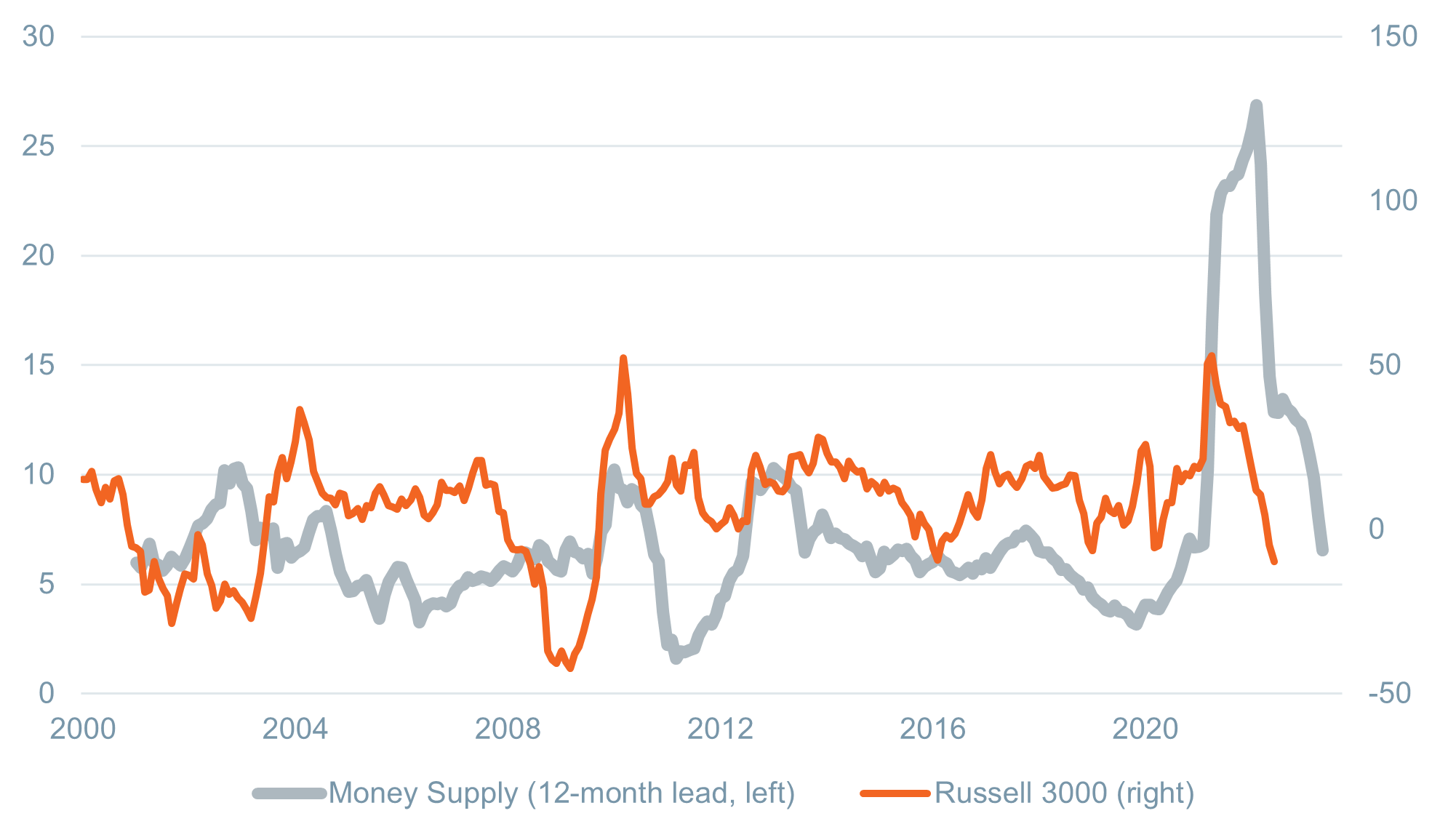 The FOMC is beginning to reduce the Fed’s balance sheet in an effort to prevent idle bank reserves from flowing into the economy and generating future inflation. We think the direct impacts that could flow from such actions have already been priced into markets due to detailed communications by the Fed and would only expect that to change if the FOMC surprises markets with a change in the pace. While the Fed’s balance sheet also affects money supply growth and could in principle affect equity market performance, there are many other important factors that must be considered and we are not basing our market expectations on balance sheet actions. And while our baseline expectation is for QT to not weigh on markets, we also recognize the pace in this round will be more rapid than the only other experience in history, which raises the risk of unexpected outcomes.