Fed Cuts Rates and Addresses a Scare in the Repo Market

September 20, 2019 — The Federal Reserve cut interest rates by 25 basis points (0.25%) on Wednesday for the second time this year. The move was very much expected by the market and therefore did not have much of an impact that day. The newly released projections by committee members showed that some think it would be best to reduce rates again this year, while others think it more appropriate to hold at this new level going forward. Perhaps more interestingly, the rate cut was overshadowed a bit by other developments in short-term funding markets in the preceding 48 hours. This caused concerns about liquidity in financial markets, and even conjured memories of the early days of the financial crisis. We do not believe another crisis is upon us, but the developments are likely to lead to a response from the Fed in the near future.

Interest rates in repo markets spiked on Monday night, prompting the Fed to inject liquidity into the system—up to a max of $75 billion—for the first time in more than a decade. “Repo” is shorthand for the market for “repurchase agreements,” where money-market funds or other asset managers seeking very short-term (typically overnight) loans pledge collateral (commonly Treasury notes) for business operations. The initial spike in repo rates appears to have been caused by idiosyncratic factors that sucked supply of short-term funding out of the market.

Importantly for the Fed, the repo spike drew away money from the federal funds market, where banks lend to other banks overnight, driving up the federal funds rate. That caused a problem for the Fed, which at the time was targeting federal funds rates between 2.0-2.25%. On Monday night, the rate reached the top of their desired range at 2.25%, and on Tuesday night those loans traded at an average of 2.3%, breaching the upper limit of the Fed’s target (Figure 1).

Understandably, the Fed does not want the federal funds rate drifting out of its stated target range. This would be somewhat detrimental for monetary policy in a nuts and bolts sense, that rates were higher than the Fed desired. And it could be far more damaging for market confidence and the Fed’s reputation given the never-ending headlines that would soon follow, covering the Fed’s inability to control its own target rate. It should not be surprising that the Fed stepped in on Monday and again each day this week with liquidity in an attempt to keep down rates in its target zone. 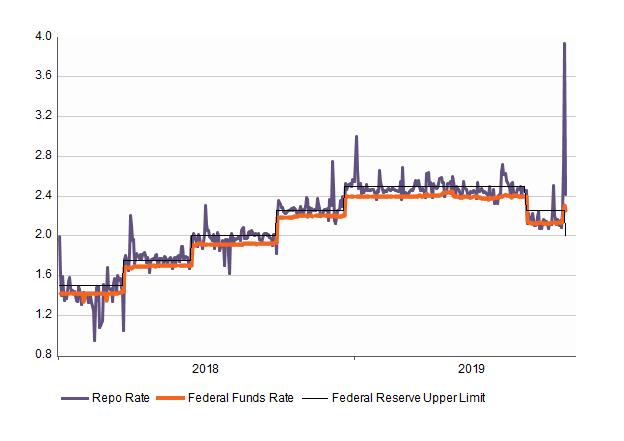 These Fed operations are just patches, though. The Fed is likely seeking ways to avoid the need to keep announcing one-off actions to provide liquidity. The first, and most likely action, would be to create a new, standing repo facility that would essentially operationalize the actions taken on Tuesday and again on Wednesday. This idea was floated by economists at the St Louis Fed in early 2019 (and with a follow-up a month later). Essentially, instead of the Fed “stepping in” every time there is a need for reserves, it would just create a way for the market-making primary dealers to get liquidity any time they needed. If the Fed decides that we are currently experiencing a one-off situation, a confluence of idiosyncratic factors resulting in funding shortages, then this repo facility—which would have likely been in the works anyway— would be all that is needed.

The other possibility is that there is a true, enduring shortage of liquidity in short-term markets. The Fed’s management of its declining balance sheet is very much an experiment, (as was the increase in the balance sheet). The spike in repo rates might have been a first sign that the experiment is coming to an end. When the Fed was contemplating ending its balance sheet runoff, it was very open about admitting it was unsure of the level of reserves needed in the banking system, and it came to the current level after much internal discussion as well as extensive collaboration with market participants. The spike in repo rates may be an indication that the current level of reserves is in fact too low. If that were the case, then the Fed would want to add reserves to the system by increasing its balance sheet.

Some might ask how it could be possible for there to be a shortage of liquidity with $1.5 trillion of “excess reserves” held by the banks at the Fed. The answer is that these “excess reserves” are only in “excess” with respect to their regulatory reserve requirements. As we discussed in the April 2019 Capital Perspectives’ “In Focus,” financial markets have changed significantly, especially in a regulatory sense. Good examples are the liquidity coverage ratio (LCR) and high-quality liquid assets (HQLA) requirements. These post-crisis regulations don’t necessarily tell banks that they need to keep more reserves at the Fed, but banks may indeed satisfy those requirements by holding reserves. Even though these $1.5 trillion show up as “excess,” they might not be in excess at all, if the banks feel like they want to hold them for their own reasons and not lend them into the overnight markets. As we said in the “In Focus” piece, that just means their demand curve for reserves has shifted to the right in a massive way. If the Fed thinks that this is the case, then they would likely start to grow the balance sheet again. 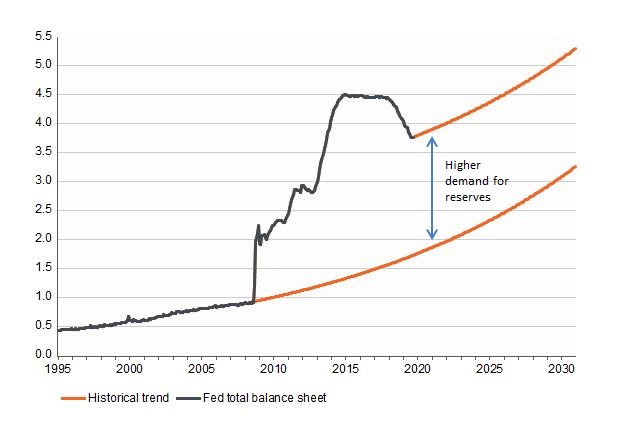 Source: Federal Reserve, WTIA
Note: The orange lines are hypothetical and for illustrative purposes. They are not forecasts.

Does that mean they’d be conducting more quantitative easing (QE)? No, that would not be QE. Think of it this way: The Fed’s balance sheet always grew over time before the crisis (Figure 2). This was at roughly a 5.5% annualized rate as it grew with the economy plus inflation plus some other considerations. If it weren’t for the crisis, the Fed would likely have a balance sheet as high as $1.75 trillion right now based on historical growth rates. Currently, the Fed is keeping the balance sheet flat. At some point, it would need to be on an upward trajectory again, possibly at that 5.5% rate. But there has definitely been an upward shift in the required size of the balance sheet, as we wrote about in April, for multiple reasons. If the Fed decides the excess reserves are not truly “excess,” then it would just start growing the balance sheet on a monthly basis again, as it had done for decades. Earlier in this year, Chair Powell said it is the demand for reserves that will ultimately determine the size of the balance sheet. We might be at that point now.

The recent spike in repo rates have sparked concerns about whether this spike is an indication of systematic problems with the functioning of the bond market in the post-QE era, or signals of broader risk aversion in the market. We do not think there are serious liquidity shortages in short-term markets like we saw at the start of the financial crisis more than a decade ago. But we do expect the Fed to take some action to address the issues in an effort to ensure markets are operating smoothly.