Is Italy about to say ‘ciao’ to the euro?

May 31, 2018— Over the last week there were significant developments in Italian politics that roiled worldwide markets. We believe some of the market volatility was an overblown reaction to the proposal of an anti-euro finance minister, dredging up Greece-style fears of cracks in the eurozone but in a much larger, more consequential country. The proposal was more political theater than anything else. But there are real risks too, as Moody’s placed Italian debt on review for a possible downgrade, which if it happened, could have severe impacts for financial markets. We do not currently expect a cataclysmic event such as Italy threatening to exit the euro or a debt downgrade, but we will be watching closely if elections were to occur in the summer or fall.

In the March 4 elections, popular support had swung away from the center-left Democrats and center-right Forward Italy, toward the leftist Five Star Movement and the right-wing League (also known as the Northern League).

Per normal protocol, the leading parties were obliged to work with Italian President Sergio Mattarella to form a governing coalition. However, the leaders of Five Star (Luigi di Maio) and the League (Matteo Salvini) were encouraged by the momentum they had achieved in March and decided instead that they would prefer new general elections through which they might accrue further popular support.

Although Di Maio and Salvini separately went through the motions of engaging in negotiations with other parties, they were never serious about closing any deal, and rather, used the negotiations to gather free media coverage for public posturing ahead of the new elections they sought to trigger.

The inter-party negotiations between Di Maio and Salvini illustrate this point. Neither would agree to the other serving as the coalition’s prime minister, so they presented a little-known academic for that post. Salvini said he would not abandon his party’s traditional alliance with Forward Italy even while joining a coalition with Five Star. Also, the two parties have deeply conflicting policy agendas, particularly over public finance. They were never meant to govern together.

The final intended move by Di Maio and Salvini was to present a highly controversial anti-euro, anti-German candidate, Paolo Savona, for finance minister. President Mattarella had already promised to veto Savona, so the fact that he was presented anyway meant his nomination was simply a “poison pill” designed to sabotage acceptance of the coalition. When Mattarella carried through with his veto promise, Di Maio and Salvini were each able to claim breathless outrage against the presidency, the global bankers, the European Union (EU), and the European Central Bank (ECB).

Lost amid all of the outrage was the fact that the president had suggested another qualified pro-euro candidate from within the League—not to mention the fact that, before the March 4 elections, the League and Five Star had stated they would prefer to remain in the euro.

After the president vetoed Savona, Di Maio and Salvini promptly withdrew their proposed coalition government. President Mattarella appointed former IMF economist and finance ministry official Carlo Cattarelli as interim PM. Di Maio and Salvini then pledged to carry out a no-confidence vote, which would trigger new elections by September—and is exactly what both wanted.

Interim PM Designate Cattarelli subsequently expressed doubts about formation of an interim technocratic government. His inability or unwillingness to form an interim government would have accelerated elections to July, allowing Salvini and De Maio insufficient time to campaign.  Consequently, Salvini and De Maio reversed course and submitted a pro-euro candidate for finance minister, who was then promptly approved by President Mattarella. Acquiescence by Salvini and De Maio to forming a coalition government does not change the fact that their coalition is a forced, unstable marriage, nor the desire of each leader to seek the position of PM while their popularity is running high. Therefore, we assess a continuing significant risk of new elections.

Moreover, Five Star and the League both recognize that a significant majority of Italians favor staying in the euro. (Most polls suggest about 60% are in favor of the euro, with 25% opposed and 15% undecided.) The parties know that to increase their popular appeal, they must draw pro-euro voters away from centrist parties while retaining anti-euro voters. Therefore, the parties’ positions toward the euro have tended toward ambiguity. Ultimately, neither Di Maio nor Salvini will take a principled stand regarding the euro if doing so could cost one of them a shot at becoming PM. 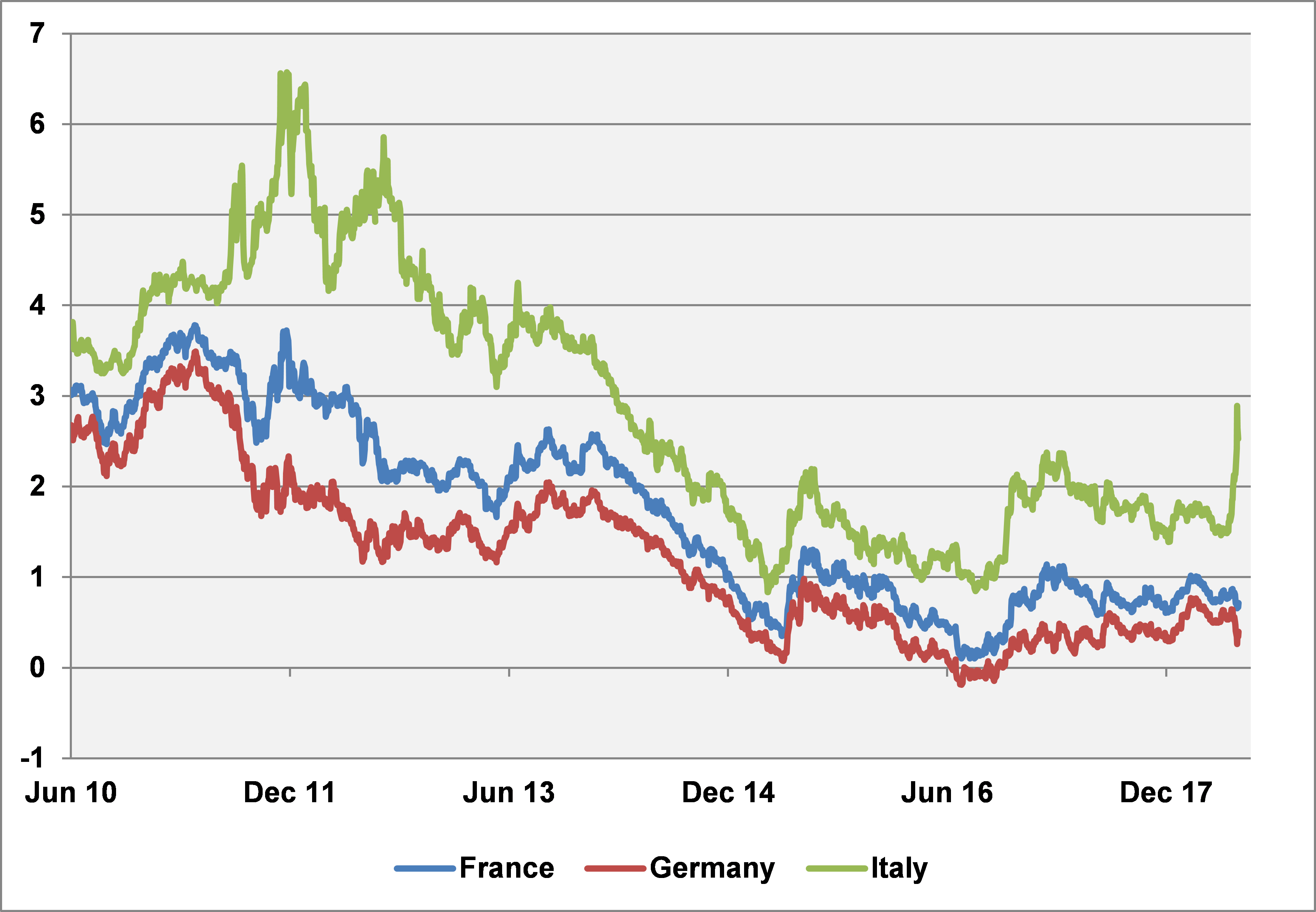 Moody’s made its mark on the situation on May 25 when it placed its Italian debt Baa2 rating on review for a possible downgrade. The last time Moody’s changed its rating on Italy was October 2017, affirming its Baa2 rating, but changing the outlook from stable to negative. At the time, Moody’s highlighted the government’s very high debt burden as reason for the change in outlook. A negative outlook typically signals to the issuer that unless current trends in credit quality change, a downgrade is likely over the long term (typically a two-year window).

The combination of the political machinations described above and Moody’s announcement drove Italian yields sharply higher and roiled equity markets as investors fled the country’s debt for the safe havens of Germany and France (Figure 1). Despite the Italian yield spike in the wake of the news, it is worth noting that they had been trending upward since the start of May.

Although Italy was not due to be reviewed, the ratings committee was called outside of the sovereign calendar dates for EU sovereign ratings, based on the event of a new Italian government with a decidedly credit-negative fiscal and economic platform. The primary drivers behind the review were concerns that a new government’s fiscal plan will drive higher Italy’s debt burden, and that pension reforms put into place by previous governments might be reversed.

According to Moody’s rating methodology, when a rating is placed under review, the agency will either affirm the rating or take action within 90 days. However, in reality, this is not a hard deadline and the rating can remain under review for a longer period of time, essentially until the agency has enough information to make a decision. The timing of the new elections could have an impact on Moody’s timing.

A downgrade of two notches to “below investment grade” could have serious implications. For example, Italian banks hold a significant amount of Italian debt on their balance sheets, which helps explain the sharp volatility for Italian and worldwide bank equities after the announcement.

Another implication would be the eligibility of Italian bonds for purchase by the ECB. Under its rules for the ongoing asset purchase program, Italy’s second-best credit rating must be of investment grade for eligibility to purchase. Both S&P and Fitch also currently rate Italy at the second-highest notch in investment grade, but they have both warned that fiscal actions that could worsen the debt load would put the ratings at risk.

The recent volatility in Italian and worldwide markets was driven both by political events and Moody’s action. In our view, markets overreacted to what was likely a bit of political theater by Italian political parties caught in a stalemate and jockeying for control, while there are real reasons that the political situation could continue to drive markets in the future. We do not expect any Italian coalition government to do anything as dramatic as threaten an exit from the euro, nor do we expect it to test the ratings agencies—and by extension, the ECB—with reckless fiscal policy. We do, however, note the risks and will continue to closely monitor the situation.