Meet the new Fed (same as the old Fed)

January 30, 2018— As the Federal Reserve’s Open Market Committee (FOMC) meets this week to discuss interest rate policy, it will mark a changing of the guard in several significant ways. Most obvious is the end of Janet Yellen’s tenure as chair (which formally goes into effect on February 3) and the start of Jay Powell’s leadership. Yellen served just one term as chair, but she came into the position with very similar experience as her predecessor Ben Bernanke; both were academic economists who had spent most of their careers in academia. Prior to Bernanke, the central bank was run first by Paul Volcker and then Alan Greenspan; both were professional economists having worked in business and government. The fact that Powell will be running a board in Washington that will soon be made up almost entirely of Trump appointees is fueling speculation that Fed policy may undergo a significant shift. We are skeptical.

Powell is a new face in the chair’s seat but he is of course not new to the Fed. He has been a governor since 2012 and has never cast a dissenting vote. President Trump’s pending appointment of Carnegie Mellon Marvin Goodfriend has been viewed by many as a hawkish influence (meaning he would tend to want to raise rates more quickly), but in our view is no more hawkish than Stan Fischer, who was Yellen’s vice chair until last October. Goodfriend has a long history with the Fed as the research director for the Fed bank in Richmond, frequently coauthors papers with Fed economists, serves on an advisory panel to the New York Fed, and has spoken at enough Fed conferences (including the preeminent Jackson Hole event) that he has been influencing the FOMC as a pseudo-member for more than a decade. John Williams of the San Francisco Fed is rumored to be high on Trump’s list to be vice chair, and would mark another source of continuity. In short, Powell is an established Fed veteran who will be surrounded by familiar faces and backed by a well-entrenched research staff that holds as much if not more sway than some members of the committee.

What does it mean for interest rates?

In our view, the outlook for Fed rate hikes remains the same in 2018 as it would have been if Yellen were still at the helm. The important questions are about the economy and inflation. With fourth-quarter GDP coming in at 2.6% annualized, it marked a solid, yet not stellar, full year of growth in 2017 of 2.3%. That is a couple tenths higher than the average rate during the recovery, but importantly comes in the context of a very tight labor market. Low unemployment should lead to faster wage growth in 2018, and could contribute to higher inflation.

The outlook for inflation is quite positive, in our view. Core PCE inflation (the most important measure to the Fed) was running up close to its 2% target in late 2016 and early 2017 before a one-off shock to wireless telecommunications prices brought down the overall inflation measures in March of last year. That one-month shock of course also sharply brought down the year-over-year calculations (seen in early-2017 in the chart below), and of course will continue to do so until it rolls out of the calculation in March of 2018.

Core inflation has been solid in the time since that one-off impact from wireless, averaging month-over-month gains of 0.175%. If that would continue going forward, the year-over-year change would jump by nearly half a percent and then march steadily toward 2%. 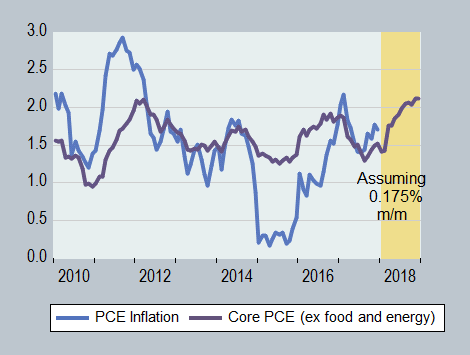 The Fed is currently projecting three interest rate hikes in increments of 0.25% in 2018, and we expect the same. That would be the same as occurred last year. (It’s worth noting that 2017 was the first time the Fed matched its rate hikes to the expectation it held at the start of the year.) The possibility of higher inflation as discussed above and the recent growth figures are pushing some to raise their expectations to four hikes with upside risk for more. We are skeptical there, too.

In short, yes, four hikes are certainly within the realm of reason. But there are several reasons to expect the Fed will be reluctant to accelerate too much. They include: 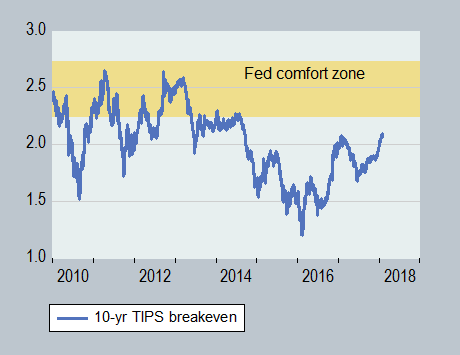 The Fed is on the verge of going through major changes with Jay Powell taking over as chair and a near-complete remake of the governor seats by President Trump. However, we don’t expect major changes to policy as a result. Powell has a view of policy similar to outgoing Chair Yellen, and will be using the same staff. In our view, other new board members will have an impact on the margin, but not enough to significantly change the trajectory of policy. We expect rate hike decisions to be governed by the incoming data, and that there will be three in 2018, with little risk of more than three. With yields rising across the curve, we remain underweight to core fixed income.