February 12, 2021—What a difference a few weeks can make. In mid-January after announcing his stimulus plan, there seemed to be a 50/50 chance of President Biden seeking bipartisanship in getting 10 Republican Senators on board, or the (allegedly) more challenging route of budget reconciliation, which only requires 50 votes but puts limits on the actions that can be taken. Less than a month later all signs point to the latter, an all-too-familiar partisan divide inside the beltway, where brinksmanship reigns and compromise is a dirty word.

At the moment it appears President Biden and the Democrats intend to push as much of the proposed $1.9 trillion as they can. There are three reasons the outlook has shifted so quickly and in the direction it did: Biden’s turn away from bipartisanship; the disappearance of the key political, moderate Senate Democrats; and the apparent irrelevance of the purported procedural hurdle, the Senate’s Byrd Rule prohibition on expanding long-term deficits, which appears to be a toothless tiger. It appears that rule will barely limit the size of the stimulus effort and not force the Democrats to include any revenue increases.

Larger stimulus would push gross domestic product (GDP) growth forecasts higher in 2021, mitigate more permanent damage to the economy, and increase the likelihood the post-COVID economy will look more like it did before the pandemic. That would further support our overweight to equities, underweight to core fixed income, and our preference within equities for domestic small cap as well as emerging markets.

A month ago, the president appeared more likely to seek a bipartisan solution. His first official meeting in the Oval Office was on February 1 with 10 Republican Senators who proposed a much smaller stimulus package of $618 billion that included funds for vaccine distribution, $1,000 stimulus checks for individuals, extensions of unemployment insurance (U/I) to July with a boost of $300 per week. By all accounts the meeting went well and both sides agreed to continue talking. As of the following weekend Biden was still pushing for the full amount and newly confirmed Treasury Secretary Janet Yellen did a media blitz arguing the risks of too small a package far outweighed the risks of a large one.

It’s possible President Biden is taking a tough stance as a negotiating tactic, but House and Senate Democrats have been proceeding on strict party lines with the machinery of pushing the full plan by budget reconciliation (passing an initial budget with reconciliation instructions, individual committees passing their respective reconciliation pieces, etc.). The further it moves along, the more likely its passage becomes.

The acquiescence of moderates

The most important development in the past several weeks is the lack of pushback from moderate Senate Democrats such as Joe Manchin (D-WV), Kyrsten Sinema (D-AZ), and Jon Tester (D-MT), all of whom were expected to push back on either the size of the proposed bill or on a purely partisan approach. But in early February Tester commented on the Republican proposal “[it] has to be bigger than that,” and later went all-in: “I don’t think $1.9 trillion, even though it is a boatload of money, is too much money.”

The most stunning turnaround is from Joe Manchin. In early January he appeared to be fiscally wary on the prospect of $2,000 stimulus checks, saying “I don’t know where the hell that would come from…That’s another $400 billion.” Contrast that with his statement less than a month later, on February 3 about the full Biden plan: “If it’s $1.9 trillion, so be it.”

If there was ever a curriculum in the law of unintended consequences, budget reconciliation and the Byrd Rule could probably suffice as the entirety of the course materials. The process was created in 1974 as an efficient way for legislators to keep the nation’s budget on track, especially for reduction of deficits if they were drifting wider than expected. When Senator Robert Byrd proposed his eponymous rule strictly limiting the types of actions that could be taken, he said it was to prevent the opening of a “Pandora’s box” of abuse of the process. (The rule passed the Senate 96-0.)

However, over the decades budget reconciliation has increasingly been used to implement new policy, sidestep the usual Senate process, and blow up the government’s budget in the process, all in defiance of at least the spirit of the law. While it may be the case the rules could have prevented the Republican 2017 tax law from succeeding if Democrats objected at the right time, there is little indication thus far that Democrats will let procedural hurdles prevent them from going big.

Passage of another massive stimulus would boost growth well above projections without any new spending, in our view. We don’t think zero stimulus is a remote possibility, but it’s worth noting we would expect weakness and even a slight decline in the economy, as previous stimulus payments wane, millions remain unemployed, and U/I programs are slated to expire on March 14, not very long from now.

The Figure below reflects higher trajectories under both $1.0 trillion and $1.5 trillion packages, which would push consumer and business spending above pre-COVID peaks by mid-year. It’s not just the direct impacts of government money, but also the dynamic impacts of faster vaccinations and a quicker return to a world with restaurants, vacations, childcare, and more willingness of workers to return to their jobs with less fear of infection.

This is not an endorsement of any stimulus plan, as there are clear downsides too including higher debt to be dealt with in later years, and other considerations such as generous U/I benefits providing an incentive for some workers to stay home. Nevertheless, the impact on growth in 2021 would be a boost.

Cumulative percentage change in real GDP in 2020 and WTIA forecasts vs. median trajectory of past recessions from 1957–2009 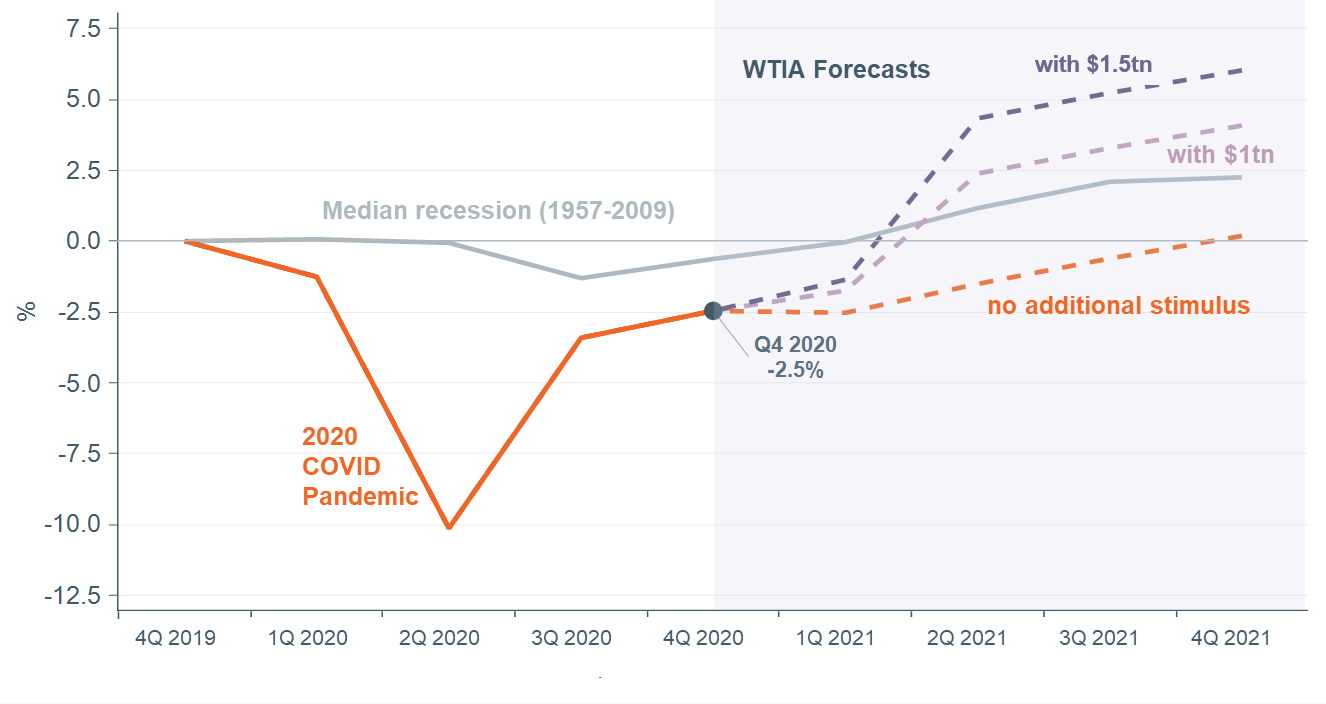 Data as of February 10, 2021. Sources: Macrobond, Bureau of Economic Analysis, WTIA forecasts. The gray line shows the median cumulative percentage change of GDP from the start of past recessions for the period 1957–2009.

The full $1.9 trillion stimulus is not a done deal, not by any stretch. Recall that passage of the 2017 tax law was not a certainty for much of that process. And there is always the chance that Democrats have been pushing the large bill as leverage to negotiate a larger bipartisan agreement. But the momentum behind a large stimulus package passed through budget reconciliation along party lines and with no tax increases is quite strong. We expect a large stimulus package to boost growth in 2021 and support our current positioning of an overweight to equities, underweight to fixed income, and our preference within equities for domestic small cap as well as emerging markets. However, we are also wary that inflation could surprise to the upside in the second half of the year if consumers are awash with cash and spending on services, especially if there are supply chain issues. If higher inflation transpires then interest rates would likely follow. In that case we stand ready to adjust portfolios.