The Federal Reserve Hints at Rate Cuts to Come

June 20, 2019 – The Federal Reserve left rates unchanged at its meeting this week, but as we expected it would, it hinted that rate cuts may be coming soon. The Federal Open Market Committee (FOMC) kept an optimistic stance, saying it still expects economic growth to continue, the labor market to remain strong, and for inflation to remain subdued, but that the “uncertainties around this outlook have increased.”  Federal Reserve Chair Jay Powell expanded on the committee's discussion and stance during the press conference, saying the uncertainty comes from weaker global growth and the prospect of escalating trade wars. The official projections from the FOMC as well as the press conference discussion made it clear that the group is leaning towards cutting rates sometime later this year. Equity markets cheered the message, moving up a bit on the day and then jumping to new all-time highs (as measured by the S&P 500) at the start of trading on Thursday. This is on top of strong moves earlier in the week on the heels of a similar dovish stance by the European Central Bank’s (ECB) president, Mario Draghi. While we are encouraged by the Federal Reserve’s messaging and believe it to be an appropriate move, we caution against getting too excited about equities until there is more clarity on the path of the economy, as well as the biggest risk: the trade war.

As we described in a recent post, the economy does not appear to be in contraction but has shown enough slowing for the Fed to legitimately consider cutting rates (See Will Markets Get Some “Summer Loving” from the Fed?, June 6, 2019). In addition to the economic data, there are clear signals from the market, especially from Treasury yields and inflation breakevens,that argue strongly for a cut.

We will add another argument that has likely gotten the Fed’s attention: that its current rate stance is actually more restrictive than they want or ever intended it to be. Although the Fed has not hiked rates in 2019, its policy has gotten more restrictive because the so-called “natural rate of interest” (alternatively called the “neutral rate”) has drifted down by some estimates this year (Figure 1). That natural rate, often referred to as “r-star” or “r*” is meant to show the interest rate that would neither be restrictive nor accommodative for the economy. Generally, r* is higher when growth is stronger, inflation is higher, and demand for credit is higher. When the Fed sets the Fed funds rate below r*, it stimulates the economy, and when it sets the Fed funds rate above r*, it is putting on the brakes. As the Fed has been hiking rates for several years, it was doing so with the belief that r* would be drifting up slowly as well. But the economic weakness in 2019 caused r* to drift down, as can be seen at the far right of Figure 1. This simply means that with the current Fed funds rate at 2.25-2.50, the Fed is pressing on the brakes harder than they intend to. 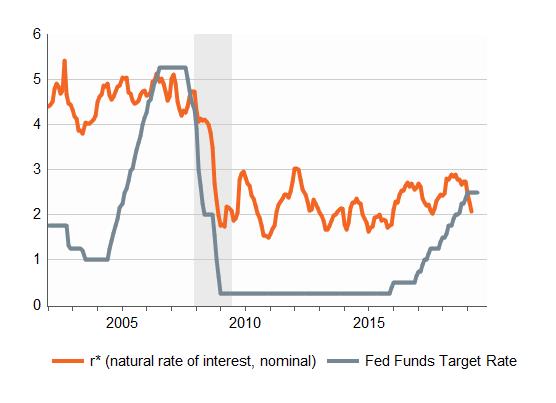 With the Fed likely to cut rates in the coming months, the key question for investors is of course the impact on equities and markets. Many in financial markets and the press have taken to discussing the Fed’s possible rate reductions as “insurance cuts,” in the sense that they are cutting rates not because they see a recession coming, but because risks have mounted and the lower rates provide some “insurance” against a bad outcome. The experiences of 1995 and 1998 are held out as examples of successful “insurance cuts,” when the Fed cut rates by 75 basis points in each instance in the face of financial market stress and some mildly decelerating economic data, no recession followed, and equity markets performed quite well. This would appear to be a comforting analog to today’s environment.

The trouble with that comparison is that when the Fed first cuts rates, it always thinks that it is making insurance cuts. For example, when the Fed initially cut rates in September 2007, most members of the committee were also thinking it was “insurance,” not that the economy was headed toward the calamity from which we’re still arguably recovering. Equity markets initially reacted quite positively, jumping 2.9% on the day of the announcement, and by a total of 6% over three weeks, only to be followed the multi-year bear market. In another example that argues to not get too excited by initial market reactions, when the Fed first cut rates in 1998, the S&P dropped by 8.5% over the ensuing week before reversing course, and ended up delivering +19% in 1999.

More generally, the impact on equity markets over the longer term are not determined by whether the Fed cuts or not, per se. They are determined by how the economy performs. Figure 2 shows the performance of the S&P 500 with the index normalized to 1.0 on the day of the first Fed rate cut over the past five experiences. The day of the first rate cut is shown by the grey line. In three of the instances, equities went higher over the ensuing year, and in two instances, equities declined. It should come as no surprise that the two instances of decline, 2000 and 2007, are the two instances where the U.S. experienced a recession. 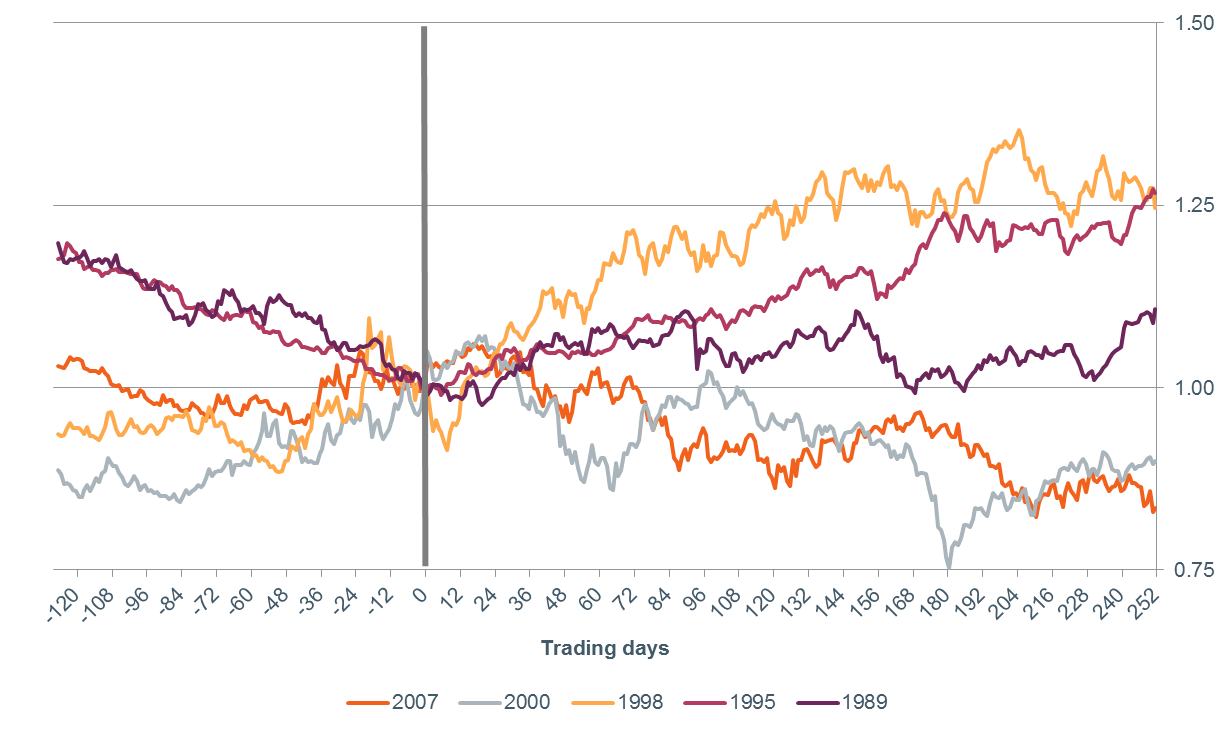 We think the move by the Fed to lean toward rate cuts later this year is justified by the economic data, the financial market signals, and that inflation is unlikely to move sharply higher in the near term. Although the move is pushing equity markets higher and may continue to do so until the next Fed meeting, we caution about getting too exuberant until there is more clarity on the trade and tariff situation. As we have said for quite some time, a continuing escalation of the trade war would bring real damage to the economy and the profitability of companies, and by extension to the performance of financial markets. We still believe the U.S. economy to be on fairly good footing, despite the obvious pain being endured by the manufacturing sector in a global slowdown that is being amplified by tariffs. Should the trade situation be resolved we would be more optimistic. But the risks remain and we recommend a neutral positioning.