February 25, 2022—The Russian invasion of Ukraine this week put an end to months of speculation and brought the crisis to a new phase. As we wrote earlier this week, our investment committee elected to maintain our portfolio positioning. We believe the critical considerations for investors is whether the Russia-Ukraine conflict derails the otherwise optimistic global economic outlook by way of high energy prices (which could sap spending power) or by way of inflation.

As shown in Figure 1, the conflict is expected to dent economic growth to some degree, but not substantially enough to change our outlook for markets in the year ahead. Financial markets have been behaving similarly, with domestic equities initially retreating for several hours on Thursday, the first day of the conflict before, recovering and posting strong gains by the market’s close. Oil prices surged on Thursday but then similarly reversed course. Equity returns were very strong on Friday. We discussed our outlook in detail in a client webinar and summarize those views here.

Western governments responded with increased sanctions on Russian and Belarus banks, companies, and individuals. The Biden administration moved to block the five largest Russian banks, which hold 80% of the country’s banking assets, from access to the global financial system. It also announced restrictions on exports of technology products to the country in an attempt to hobble that sector.

The U.K. announced sanctions as well, freezing assets and imposing travel bans on eight wealthy oligarchs, hundreds of politicians, and 11 businesses, six of which are banks. It also banned Russia’s national airline from UK airspace. The European Union (EU) announced it will cut off 70% of Russia’s banking system from international markets. It banned the sale of aircraft and spare parts to Russia, as well as exports to energy and critical technology sectors.

In addition, sanctions are being imposed on 27 individuals and entities and over 350 politicians and military members that were crucial supporters of the invasion of Ukraine. Earlier in the week, Germany’s chancellor had already halted the Nord Stream 2 gas pipeline project with Russia. On Friday the EU placed sanctions on Vladimir Putin himself along with Russia’s Foreign Minister Sergei Lavrov, blocking their access to financial and other assets in those countries. Late Friday media reports indicated the U.S. was preparing to place those individual sanctions on Putin. Those are admittedly a symbolic step as Putin holds very few assets in his own name (three cars and an apartment) and his estimated vast wealth is held overseas by oligarchs and friends.

Perhaps as important as the actions taken are the ones not taken. Specifically, western powers did not block Russia from the Society for Worldwide Interbank Financial Telecommunication (SWIFT) financial network and also conspicuously avoided taking any action that may send energy prices soaring.

The SWIFT system is an architecture for global banks to communicate and execute transactions. President Biden and U.K. Prime Minister Johnson argued for taking that step but were reportedly rebuffed by EU members. That step could still be taken in the future but is not a clean option since it could have negative ramifications for Western and global economies and may simply push Russia and China closer together, as the latter maintains its own version.

Critically, the sanctions thus far have avoided disrupting global energy markets. If Western sanctions prohibited their companies from doing business with Russia it would lead to severe disruptions and price spikes. Global supply of oil swung from 3.6 million barrels per day (mmboe/d) of oversupply in 2020 to a net deficit of 1.2 mmboe/d, leading to higher prices last year. Before the conflict, we were already forecasting net supply deficits in 2022 and 2023. 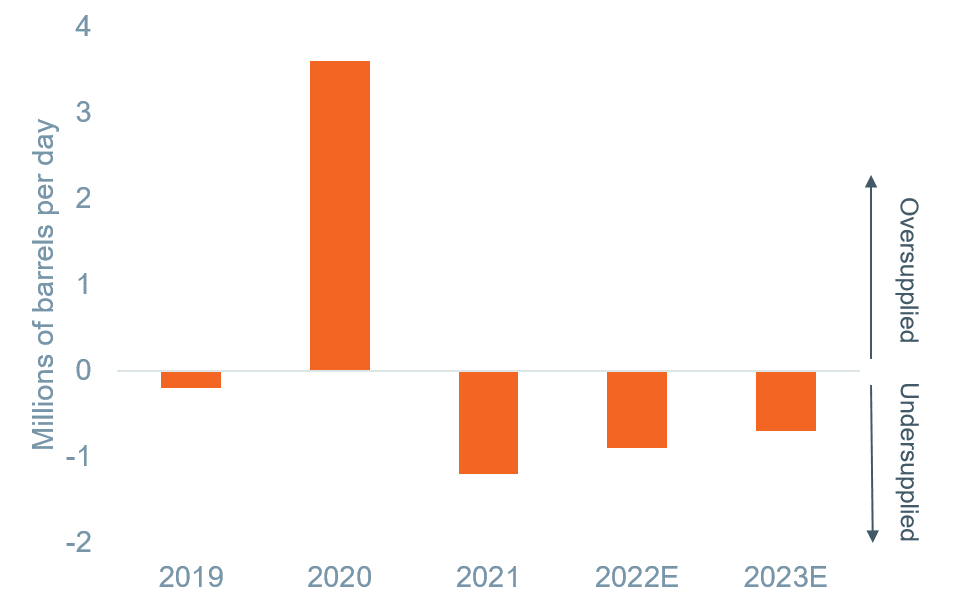 Russia is the third-largest producer of oil after the U.S. and Saudi Arabia, contributing 11% of world production in 2020. It is the second-largest producer of natural gas, after the U.S. Nearly half of its crude exports and three-quarters of natural gas exports go to Europe. President Biden addressed the issue directly during his February 24 comments indicating the U.S. is “closely monitoring energy supplies for any disruption” and coordinating with other countries “toward a common interest to secure global energy supplies.”

If Russian oil were removed from global markets, there would be little chance of making up for the loss elsewhere. We see Saudi Arabia as having a bit of spare capacity but not enough to fill a material reduction from Russia. In the U.S., the major oil players are not in a place to boost production with their current wells, and even with the U.S. being a quick-responding market we think it would take several months to appreciably increase supply.

The wild card is whether Putin would be willing to weaponize energy markets. As his army commenced invasion he warned of “consequences you have never seen in history” for any outside country that took steps to impede him. That has been widely and justifiably been interpreted as an allusion to nuclear weapons. Whether a bluff or not, it is impossible to know whether Putin is willing to withhold energy exports to drive up global prices and inflict inflationary pain on the West. Valentina Matviyenko, a Putin ally in the Russian Senate, said Friday that Russia was preparing counter-sanctions to hit at “weak” spots of Western economies, which could very easily mean energy.

But if Putin were to weaponize energy it could hurt Russia dearly in the short-and long-term. Those exports are important to the Russian economy and bring in foreign currency reserves. In the longer-term it would push nations to seek other sources of energy.

The last consideration is overall inflation which is highly subject to the resolution of the oil and natural gas issues discussed above. In addition, there are several other commodities to consider. Russia and Ukraine produce a combined 29% of global wheat exports. Russia is a major producer of aluminum, copper, and titanium, and also produces 43% of global palladium (used in catalytic converters). Ukraine is the overwhelming top producer of neon, critical to semiconductor manufacturing as well as krypton and xenon. Last, Ukraine is a major producer of corn. Major disruptions to such goods would only exacerbate the supply-chain issues that so many industries have been dealing with for the past year and are an upside risk to inflation.

That said, we do not expect the conflict to drive inflation materially higher in 2022. Global central banks, including the Federal Reserve, Bank of England, and European Central Bank have moved to more hawkish positions over the past two months, meaning they expect to hike interest rates faster and sooner than previously thought. The ECB just recently started looking like it may need to hike rates late in 2022. We expect central banks will be marginally less hawkish in light of the conflict. More important, we expect them to adjust policy accordingly if the conflict affects the outlook.

Geopolitical events are likely to keep volatility elevated in the short term, but our base case does not include a material deterioration in the global economy. In the U.S. we expect solid, above-trend GDP growth of 3% in 2022. We have similarly constructive economic outlooks for regions like Europe and Japan, and see valuations as relatively more attractive outside of the U.S.—offering potentially greater upside should tensions recede. Today’s focus is on the conflict between Russia and Ukraine, but we cannot take our eyes off the outlook for inflation and monetary policy. We are maintaining a modest overweight to equities across major asset classes, funded mainly through an underweight to investment-grade fixed income. Diversification remains paramount in these markets, and we stand ready to adjust portfolios as the situation warrants.

S&P 500 index measures the performance of approximately 500 widely held common stocks listed on U.S. exchanges. Most of the stocks in the index are large-capitalization U.S. issues. The index accounts for roughly 75% of the total market capitalization of all U.S. equities.