U.S.–Mexico–Canada Agreement: Phoenix rising out of the ashes of tariff wars?

October 2, 2018— After weeks of bargaining, surrounded by bluster and grandstanding suggesting that the demise of NAFTA as a trilateral agreement might have been near, Canada and the United States were able strike a deal at the eleventh hour on September 30 in an attempt to salvage NAFTA, just over a month after Mexico and the U.S. reached a deal. Now renamed the “United States-Mexico-Canada Agreement” (USMCA), it includes a number of provisions championed by the Trump administration, as well as a number of concessions, suggesting the administration is willing to compromise if necessary to close a deal.

As mentioned in a recent blog post, we believe that coming to an agreement with Canada and Mexico to salvage NAFTA was a key first step in paving the path for an eventual resolution of trade tensions with China, though we acknowledge it is only one step on what is likely to still be a long and bumpy road. It allows the U.S. to show that it is working toward making deals, rather than simply pursuing protectionist policies. In addition, it allows for a more united front among allies as the U.S. attempts to make headway in correcting what many of its allies also view as China’s unfair trade practices. The ability to narrow the focus of its trade “war”—rather than fighting on multiple fronts simultaneously (and against traditional allies)—should also help the U.S. as it approaches negotiations with China down the line. The USMCA deal follows on the heels of a signed trade agreement with South Korea on September 24, and recently launched negotiations with Japan, and the European Union is likely next in line.

Provisions included in USMCA may resurface as starting points in arguing for adoption of similar provisions in a deal with China and other countries in Asia. Enforceable exchange rate restrictions, for example, aimed at preventing member-countries from artificially weakening their currencies to gain trade advantages, are not typically a point of contention with Canada and Mexico. However, their inclusion in USMCA may be used as a springboard for discussions on this front with China, where exchange rate manipulation is frequently perceived as an issue. In addition, USMCA may also be a signal for potential tariff exemptions which could be secured along with a broader trade agreement. Canada and Mexico have received exemptions from potential future auto tariffs that could be imposed depending on the findings of the Commerce Department’s Section 232 investigations[i] into whether auto imports are harming the U.S. economy and national security. Canada and Mexico would be able to export up to 2.6 million vehicles tariff free, significantly higher than the current level of exports from both countries.  Exemptions from U.S. steel and aluminum tariffs sought by Canada and Mexico have not been granted yet, and are still being worked on as a separate deal.

Some key provisions from the new deal include:

We acknowledge there are still many hurdles to cross: USMCA still has to be finalized and signed, with November 30 a likely target date, given it is Mexican President Pena Nieto’s last day in office. The agreement then has to be evaluated by the U.S. International Trade commission before it can be ratified by Congress, which means it may be early 2019 before there is a vote. Depending on the outcome of the midterm elections, support for the deal from Democrats may be needed. Provisions on more stringent labor, environmental, and local content requirements may help garner some of that support, though there are some perceptions that these provisions are not strong enough. But all in all, we would expect that both parties will find a way to ratify the deal.

We view the “new NAFTA” as an important step in the right direction toward an eventual resolution of trade frictions with China, as it suggests that the administration is willing to make compromises where necessary to achieve a deal. The new terms of the USMCA not only set the stage for future negotiations, but also provide a more united front with allies. It will be critical to see whether this momentum continues in negotiations with other allies (namely, the European Union and Japan).

However, we acknowledge the points of contention with China will be much more difficult to come to agreement on, particularly compromises on lower tariffs and the forced technology transfers faced by U.S. companies in China. The U.S. trade deficit with China is also its largest with trading partners by far, making the Trump administration’s goal of reducing the massive deficit a much more daunting task.

We remain modestly overweight Emerging Markets and International Developed equities, which have suffered as a result of trade tensions in 2018 relative to U.S. equities, and where valuations suggest trade-related uncertainties are currently priced in. While the path to resolution will likely be long and remain volatile, our base case remains that a deal will eventually be reached between China and U.S., which should provide support to non-US equities. 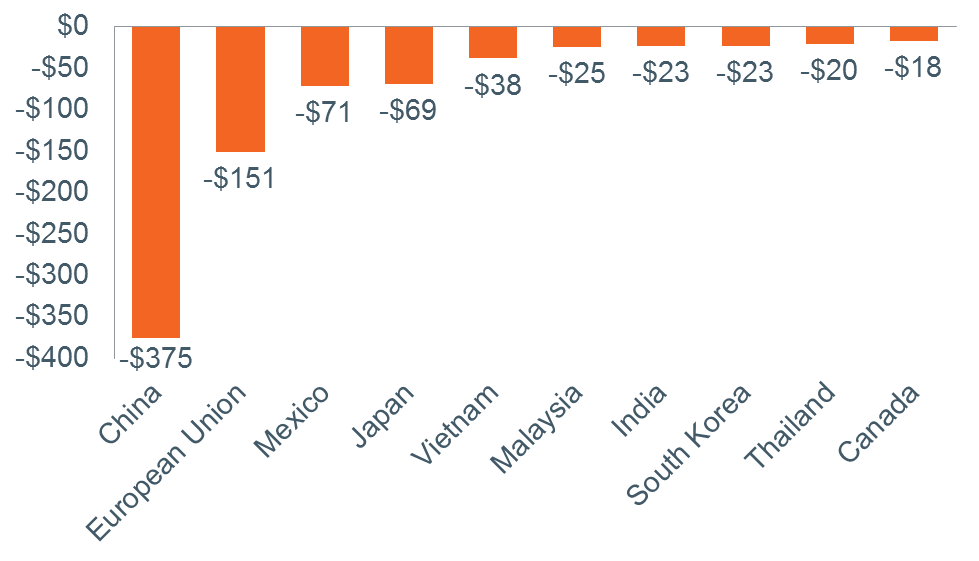 Any investment products discussed in this commentary are not insured by the FDIC or any other governmental agency, are not deposits of or other obligations of or guaranteed by M&T Bank, Wilmington Trust, or any other bank or entity, and are subject to risks, including a possible loss of the principal amount invested. Some investment products may be available only to certain “qualified investors”—that is, investors who meet certain income and/or investable assets thresholds. Past performance cannot guarantee a profit or ensure against a loss. Investing involves risk and you may incur a profit or a loss.