May 17, 2021—As my colleague Meghan Shue said a few weeks ago, the economy has been on a wild ride (much like a Hot Wheels track) and we are expecting strong growth in the second half of 2021. Stimulus, consumer spending of savings, and business capital expenditures (capex) will be enough to push full-year growth of 7.6% in 2021 in our view, with a higher likelihood of exceeding that figure than of falling short. We expect growth to push inflation and long-term interest rates higher, but not for inflation to spiral upward uncontrollably, and we don’t think the Federal Reserve will be pushed into raising rates in the next 12–18 months. All of this underpins our positioning: overweight to all our four equity asset classes with a preference for cyclical and value stocks that tend to outperform in that kind of environment.

Here we take a closer look at the components of the outlook, including the ongoing impact of the most recent stimulus package (American Rescue Plan Act) passed in March, as well as anticipated impacts of future policy such as the proposed infrastructure plans. At the highest level, fiscal policy gave a boost to growth in 1Q 2021 by way of consumer spending, but we expect fiscal policy to be a drag on the economy in the second half of 2021 and into 2022, even if an infrastructure bill is passed. Despite that drag from the fiscal side, we expect strong growth this year thanks to continued stimulus spending, job growth, capital expenditures, and the massive stockpile of savings held by consumers and businesses. We currently recommend overweights to each of our four equity asset classes, commodities, and high-yield municipal bonds, and an underweight to core municipal bonds.

Current state and the impact of stimulus

The U.S. economy continues to expand, moving up at an encouraging 6.4% annualized rate in 1Q 2021, nearly recapturing the pre-pandemic peak. That was the third straight expansion following the collapse in early 2020. But we can’t ignore how much of the recovery relied on government support. Using estimated impacts of fiscal policy from the Brookings Institution, we calculate the economy would have been $1.6 trillion lower at the start of this year without stimulus (Figure 1). This is most obvious in consumer spending, which surged in January and March on the heels of stimulus checks from the two most recent fiscal bills. Of particular note is the downward move in the “Excluding Stimulus” line in 1Q 2021, indicating the economy would have started a “double-dip recession” without the most recent actions. Last week we saw the sharp drop in retail sales reported for April, coming down from the high of the March stimulus. It is natural to ask whether the economy can expand going forward with the last set of checks already out the door.

Figure 1: U.S. GDP and the impact of fiscal stimulus 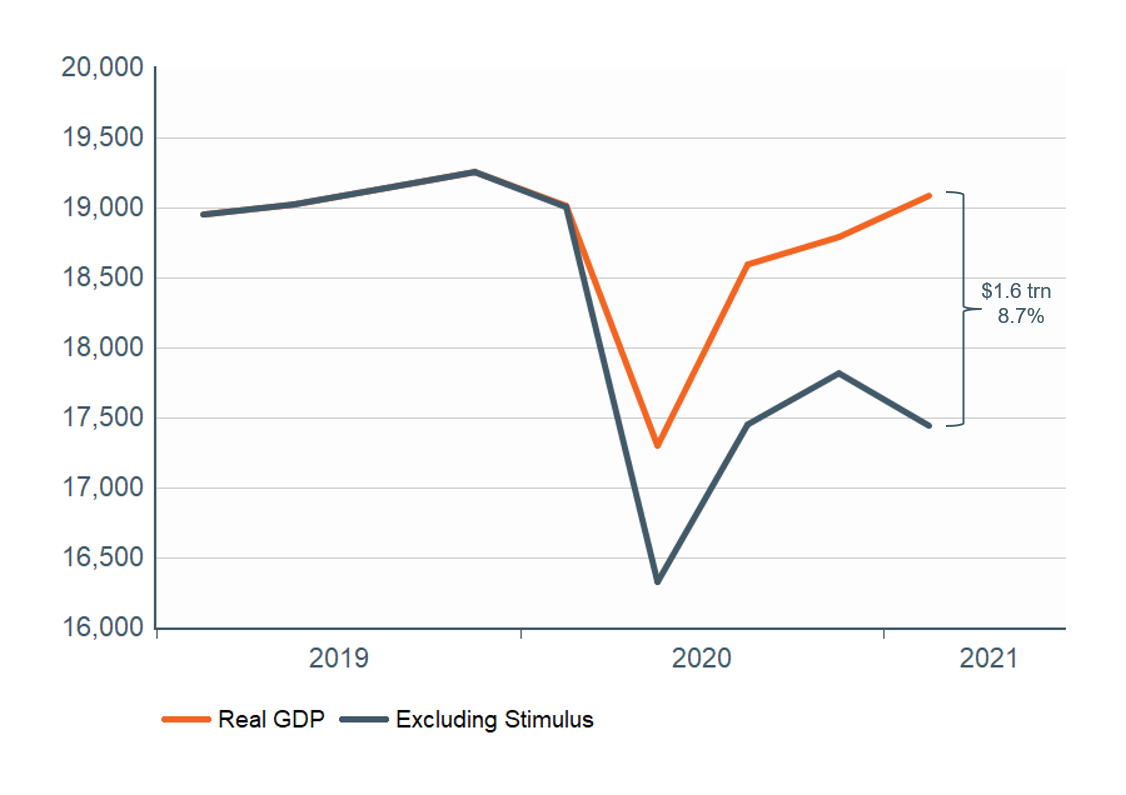 “Excluding Stimulus” data are calculated using estimates of the fiscal impact of government policy on economic growth from the Hutchins Center on Fiscal and Monetary Policy at Brookings. We remove the fiscal impact starting in 1Q 2020 to calculate the level of GDP that would result without those impacts. Sources: Bureau of Economic Analysis, Brookings Institution, WTIA.

Building blocks for the economic outlook

The outlook going forward relies on many of the familiar sources of economic growth such as job gains, wage gains, and business decisions on capex. In this unique moment we also must consider several other “building blocks” that are key to the path forward (Figure 2). They include fiscal actions already taken such as the$1.9 trillion American Rescue Plan Act of 2021, the massive savings accumulated by consumers and firms, and prospective future fiscal policy actions currently being bandied about in Washington. We take these in turn.

As is well known, consumer spending is the largest part of the U.S. economy, making up two-thirds of GDP in normal times. It has been the big swing factor for most of the COVID era, contributing relatively more than the usual two-thirds of the massive decline during the shutdowns, and relatively more in the recovery since. In the first quarter of this year, consumer spending surged nearly 11%, and contributed 7% to overall growth of 6.4%, just another way of saying the rest of the economy showed a net decline of -0.6% in the first three months. The double-digit spending growth was powered by successive stimulus bills that sent checks to most Americans in January and again in March, pushing retail sales to new all-time highs, about 17% higher than pre-COVID levels.

We expect continued strength in spending, but it will rely heavily on savings. Households stashed away more than $2.5 trillion of “excess savings” from late 2019 to the end of 2020 as shown in Figure 3. This does not include the additional savings that will have accumulated in
1Q 2021 from those two additional stimulus packages. Households likely spent less than half of their stimulus checks and built savings even higher. The current situation is unique so history can only be a rough guide, but Figure 3 shows households drawing down $1 trillion of excess savings in 2009–10 once the financial crisis ebbed (purple line coming down). That amounted to roughly 4% of annual GDP at that point. We expect strong consumer spending in the second half of 2021 as vaccinations continue, job growth remains solid, and mitigations are lifted, with these savings being a key source for that spending. 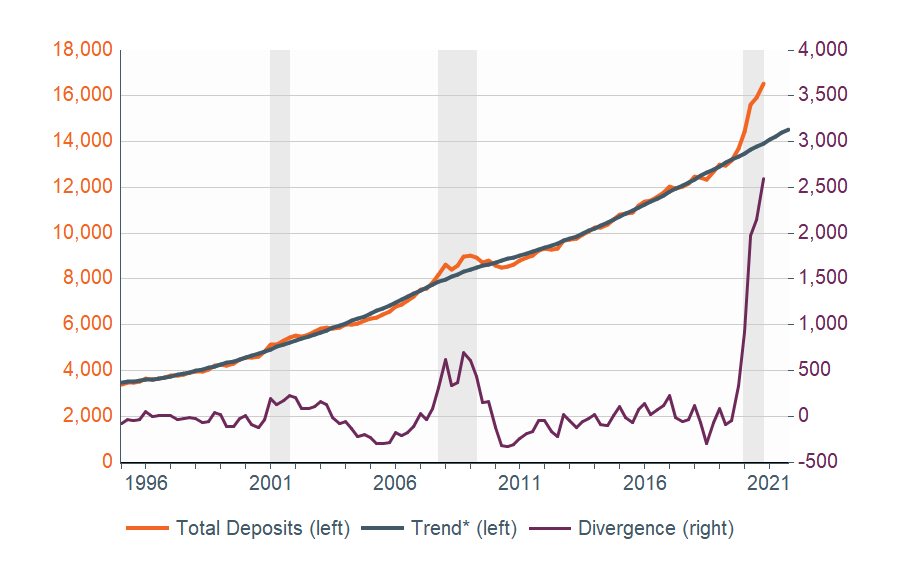 Firms have already accelerated capex spending in the recovery, and we expect it to continue. My colleague Rhea Thomas authored a companion piece to this one with a deep dive on the current status and the outlook. Encouragingly, total capex returned to its pre-pandemic level early this year and for the full first quarter surpassed it by a full percent. It has been lopsided, though, with heavy investment (understandably) on tech spending as firms adapted to their new environment as we predicted in our 2021 Capital Markets Forecast. Spending on structures, however, has declined for seven consecutive quarters.

Looking ahead, all signs point to continued growth in capex. Much like households, businesses have piled up dry powder in the form of savings, surveys of businesses point that do a good job of predicting turning points for overall capex are heading higher (Figure 4). Add in very accommodative interest rate policy from the Federal Reserve and that banks are easing terms for lending and we are optimistic this important driver of growth will complement the consumer contribution described above. 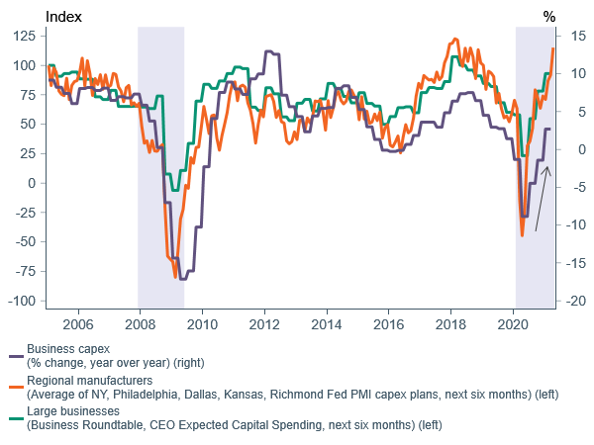 That leaves us the true wild card of Congress to consider. Predicting legislators is harrowing, and there have been several wide-ranging proposals brought forth over the past two months. President Biden introduced two separate plans with a total of more than $4 trillion in spending and $3.5 trillion in tax increases. The American Jobs Plan (AJP) contains spending on traditional infrastructure and also on environmental efforts, affordable housing, workforce development, research, manufacturing, and housing for the elderly and disabled.

A group of Senate Republicans countered with the Republican Roadmap, a proposal to spend about $570 billion on just the traditional infrastructure piece with some notable differences in distribution (Figure 5). It received a warm enough reception by Biden and moderate Democrats (most notably Sen. Manchin, D-WV) that it is likely the proverbial “floor” of a spending plan. Importantly, Senate Minority Leader McConnell (R-KY) is supportive. Biden met this week with Congressional leaders and separately with the Roadmap authors to work on a compromise. 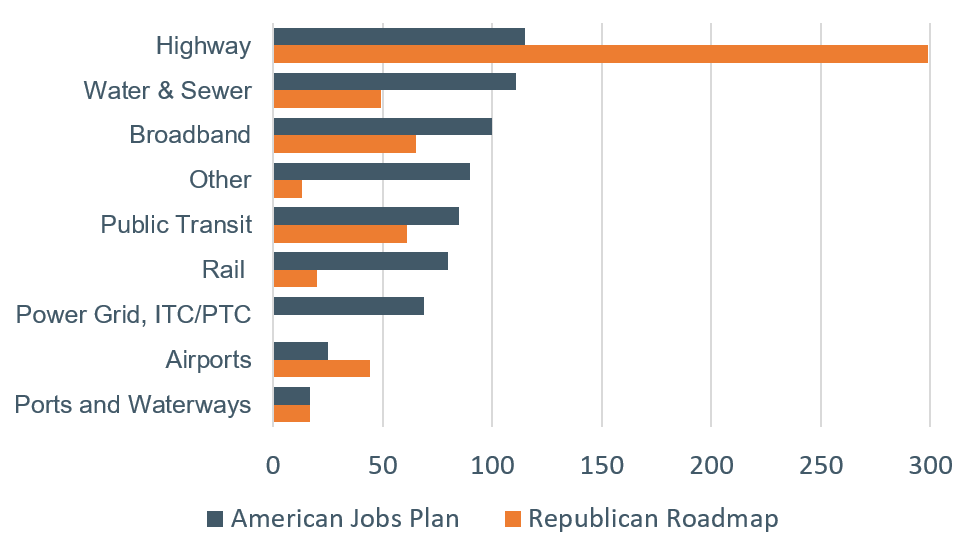 While an infrastructure plan would add to growth, it would be spread out over several years, diminishing the impact on the near-term outlook. A more immediate and consequential consideration for investors will be Biden’s proposals for tax hikes on corporations and wealthy individuals. A compromise on infrastructure may not preclude the Democrats from taking action on their own (through the Budget Reconciliation process), hiking rates on corporate income, earnings from abroad, the fossil fuel industry, capital gains for investors, estate taxes, and the top marginal tax rate for incomes above $400,000.

Those would be negatives for the economy alone but would pay for the infrastructure effort as well as other proposals, many in the American Families Plan (AFP), that would be positives for the economy. These include tax credit extensions used more at the lower end of the income spectrum for children and earned income as well as new spending on childcare, paid family leave, universal Pre-K education, and other items.

It’s impossible to determine whether all of these future policies are net negatives or positives for the economy until the policies become clearer. However, factoring in more spending on infrastructure in the near-term and being mindful of a risk to equity markets would emanate directly from the tax hikes via investor sentiment and profitability expectations, rather than indirectly from the impacts on the economy.

We expect strong growth in the second half of the year driven by the continuing influence of fiscal stimulus, the spending of consumer savings, and company capex. All of this will help job growth continue. We are projecting job growth of 500,000 per month on average through the end of the year, 50% of the $1.9 trillion stimulus spent this year, consumers to spend about 10% of the total excess savings, and 10% growth in business capex. This leads to a baseline forecast of 7.6% this year as shown in Figure 6. 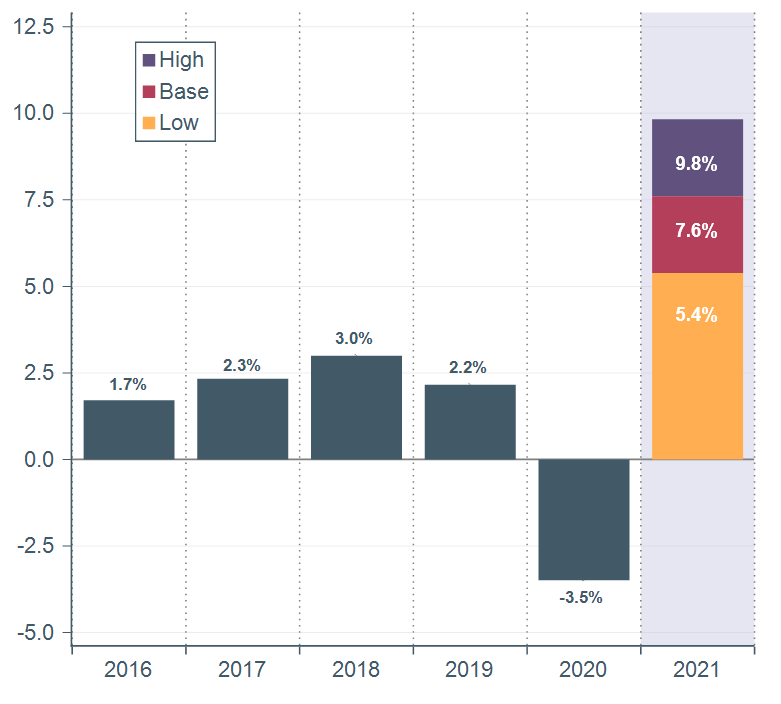 We expect strong growth in 2021 with a baseline expectation of 7.6% for the year. We think there is stronger upside risk than downside, and growth could approach 10% in the higher scenario. We do expect higher inflation as a result of this strong growth, but not strong or enduring enough that it will lead the Fed to hike interest rates at any time in the next 12 months. We believe this outlook supports our current portfolio positioning. Though the equity market is already baking in quite a bit of shared optimism, there is still room for revenue growth and operating leverage to carry equities higher over the next 12 months, and we hold an overweight position to equities versus our strategic benchmark. The ascension in interest rates looks to be taking a breather, but we expect rates to move higher toward 2–2.25% for the 10-year Treasury. This backdrop has historically been conducive to value equities, and in March, we shifted portfolios to be better positioned for this outlook. This year the market has shown its refusal to move in a single direction for too long, so diversification and a focus on the medium term remain critical.

Third party trademarks and brands are the property of their respective owners. Any reference to company names mentioned in the podcast should not be constructed as investment advice or investment recommendations of those companies.