November 22, 2021—Following the conclusion of the most recent Chinese Communist Party (CCP) Central Committee plenum on November 11, it now seems almost certain that Xi Jinping, currently 68 years old, will remain ruler for the rest of his life. Moreover, it seems that Xi will persist in pursuing his political and socio-economic policies, including the “common prosperity” business interventions he ordered in 2021. Xi recognizes that the “socialist market economy” fostered by several previous CCP leaders has helped lift many out of deep poverty but also sees that it has permitted the emergence of private monopolies, concentrated wealth accumulation, and increased public corruption. He views these capitalist “excesses” as ideological problems for a party founded to represent working-class interests. Consequently, in 2021 Xi ordered state agencies to engage in a series of business interventions to try to control these perceived excesses, which have had a profound adverse impact on Chinese stock performance, especially relative to global stocks (see chart). Therefore, this Wilmington Wire poses two questions: Can we expect Chinese stocks to continue to underperform? And a follow-up question: Even if Chinese stocks continue to underperform, which kinds of Chinese stocks might still offer investors alpha opportunities?

Excess returns of Chinese stocks since Xi took power in 2013 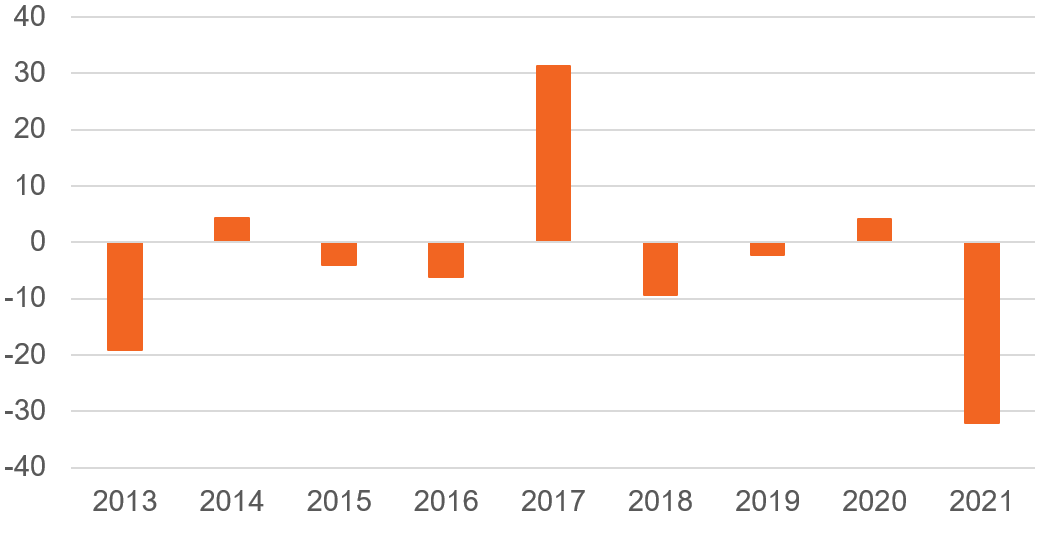 George Orwell, in his 1948 dystopian novel 1984, wrote that the slogan of the future authoritarian ruling party would be: “Who controls the past, controls the future: who controls the present, controls the past.” At the November Central Committee plenum, Xi Jinping submitted a “historical resolution” conveying his personal interpretation of the CCP’s ideological development over the last century, one that, not surprisingly, casts his rule in a very positive light. Only two prior leaders have written such Party histories: Mao Zedong and Deng Xiaoping. Xi’s history culminates with his claim to be the CCP’s “core,” a term previously claimed only by Mao, Deng, and Jiang Zemin. The resolution sets the stage for next fall’s 20th Party Congress to reappoint Xi as president either for an unprecedented third term or even for the remainder of his life. There’s even a third possibility. Xi could give up his official positions and rule from behind the scenes. There is precedent: Deng remained de facto ruler until his death, 10 years after yielding his formal positions.

The historical resolution also places great emphasis on Xi’s political philosophy, referred to as “Xi Jinping Thought,” which he first formally presented in 2017. While Xi casts his philosophy as a natural next step from those of his line of predecessors, it is fair to say that Xi Jinping Thought more closely resembles Deng’s vision of “socialism with Chinese characteristics” than it does that of Jiang, who promoted a more capitalistic vision of a “socialist market economy” and who was even willing to welcome wealthy capitalists as party members.

When he first became leader in 2013, Xi’s first action was to purge the Party of officials he deemed as corrupt or lacking in ideological discipline. This action foreshadowed the 2017 elaboration of Xi’s philosophy. While Xi Jinping Thought does not contemplate abolishing private enterprise, it does re-assert Party leadership over all aspects of the economy, emphasizes egalitarian objectives, and promises to crack down further on public corruption and enforce ideological discipline.

Xi waited until early 2021 to deploy state agencies to impose his philosophy on the largest private-sector enterprises, many of which are publicly listed. The CCP has required the mega-cap internet platforms to pledge enormous donations to CCP-approved charities. It has forced some firms to terminate profitable business lines it deems to be undermining equality of opportunity, personal discipline, or moral probity, especially for the country’s young people. The CCP has made clear that the only permissible monopolies would be state enterprises. It also ordered private-sector monopolies to adjust their business models to remove competitive moats, potentially reducing prices for consumers but also impairing the profitability and earnings prospects of firms. It has even stopped IPOs for some firms and forced some firms to increase wages for their lowest-paid employees. Finally, the CCP has refused to extend a lifeline to property developers confronting debt-servicing problems, instead compelling their multi-billionaire owners to recycle their own wealth back into their companies, sell off non-core assets, and to seek a restructuring of their bonds and bank loans. Collectively, these CCP actions have soured China’s investment climate and have contributed to the country’s bear market.

Additionally, Xi Jinping Thought, as well as the historical resolution, speaks to an increasingly powerful China, one that pursues the development of advanced technologies, enforces greater political control over Hong Kong, enjoys increasing military optionality with respect to Taiwan and the South China Sea, and can stand up to potential global and regional adversaries. These issues have caused stress between China and the United States and its allies. They have already resulted in U.S. sanctions against specific companies and individuals, as well as the possibility that Chinese stocks may be de-listed from U.S. exchanges. The recent Xi-Biden video summit was an effort by both sides to try to manage conflicts.

Will Chinese stocks continue to underperform while Xi remains in power?

If one simply extrapolates from Xi’s track record over the last nine years, especially his actions during 2021, the answer is yes, Chinese stocks will likely continue to underperform global stocks while Xi remains in power. Persistent geopolitical tensions with the U.S. and its allies, and particularly serious missteps involving Taiwan, may also serve to further depress China’s relative performance.

There are several more optimistic scenarios under which Chinese stocks might recover 2021 losses:

Which kinds of Chinese stocks might still offer alpha opportunities?

Even if Chinese stocks in aggregate continue to underperform global stocks, we believe that there may be two kinds of stocks that offer alpha opportunities for skilled active management:

We currently have a small overweight tactical allocation to emerging markets stocks. This view recognizes that emerging markets economies as a group will likely benefit from global economic recovery as COVID recedes around the world. With respect to China—31% of the index—our continuing emerging markets overweight allows for the possibility that investors might recoup some of their 2021 losses. One possible short-term scenario is that once Xi is firmly entrenched, he may dial back his common prosperity drive and allow large private-sector businesses to go back to business as usual.  In this case, there would likely be a sharp recovery in valuations. A possible medium-term scenario is that common prosperity may improve the country’s socio-economic stability as Xi intends, which could lead to an improved economic environment, and possibly also translate into improved investment returns.